The world watched as Michael Phelps won his 20th medal to pass Soviet gymnast Larisa Latynina as the highest decorated Olympian in the history of the Olympic games. Phelps would end his swimming career with 22 Olympic Medals. 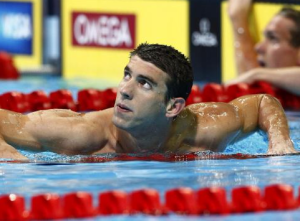 Staying on the concrete pool deck, the United States watched as one of its swimming prodigies Missy Franklin set an Olympic record. Becoming one of the few women in Olympic history to reach the finals in all seven of her events. Franklin returns home with five gold and one bronze medal.

Returning to the pool deck and one of the most memorable swimming events of the 2012 London Summer Olympics the women’s 800 meter freestyle. The 800m was truly a competition between Great Britain’s world record holder Rebecca Adlington and America’s youngest athlete Katie Ledecky Ledecky would out swim Adlington by a mile finishing six seconds faster than the gold medal favorite Adlington.

American Brendan Hansen raced in the 100 meter breaststroke finals versus his biggest rival whom he came out of retirement to beat, Kosuke Kitajima. Both would lose to South African Cameron Van Der Burgh who cheated. If they take away Van Der Burgh’s world record and medal, Hansen would move into silver and Kitajima would move up to fourth. The two men got the chance to compete one last time in the Men’s 4x100m medley relay and Hansen would swim for gold.