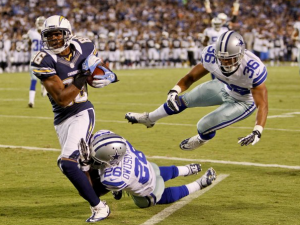 Vincent Brown had the chance for a major breakout season this year with Vincent Jackson on the Tampa Bay Buccaneers. Brown was number on eon the Charger wide receiver depth chart. In terms of numbers up to the moment of Brown’s injury he was first in yardage. Brown had six receptions for 112 yards an average of 18.9 yards per catch and two touchdowns.The closest receiver to brown is Michael Spurlock who has five receptions for 70 yards and zero touchdowns.

We need to take a long look at the Chargers injury situation. The Chargers now have two hurt starters Ryan Mathews and Vincent Brown. For these position players to be able to return midway through the season, we can’t carry extra players. The Chargers can only carry three running backs and five wide receivers. To be able to keep Mathews and Brown on the roster. Because Mathews and Brown are the fourth and sixth running back and wide receiver spots on the roster. This leads to a major problem for San Diego Chargers Coach Norv Turner. Turner’s decision to place Brown onto the IR (Injured Reserve) list.

Turner’s decision to keep Brown off of the IR list is complicated by the injury to Ryan Mathews (broken clavicle). Four running backs are expected to be kept until Mathews is able to play. If an injury occurs to another player in preseason that requires an additional roster spot, it would be difficult to keep Brown on the roster. cbssports.com