The preseason is the time where men fight to make NFL Squads. This article is going to be show casing the San Diego State Aztecs whom made their way to the NFL in the class of 2011. We are going to give everyone updates on all of the Aztecs from this years NFL draft class. We are going to break it down into two athletes per article. This article is about Ronnie Hillman and Ryan Lindley. 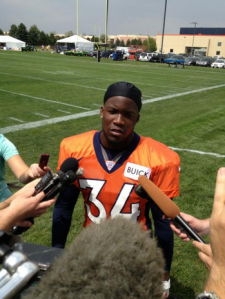 Ronnie Hillman is one of the best running backs to walk the halls of Montezuma Mesa and is getting his chance to play in the NFL on the Denver Broncos. To refresh everyone’s memory Hillman was selected in the 3rd round (67th overall pick) of the 2012 NFL Draft. Hillman has been doing a great job in Denver and has impressed management.

He has moved up the depth chart through his hard work and dedication. Hillman could become the 3rd down back for Denver. Unfortunately Hillman has been succumbed to injures he suffered at SDSU.  Hillman could see playing time in the Broncos next game on Sunday.

No. 3 pick: RB Ronnie Hillman (third round, No. 71 overall) — The Broncos drafted Hillman with the expectation he could provide a change of pace and a breather for Willis McGahee. Hillman showed flashes of brilliance early in training camp. His open-field moves and body control when making cuts low to the ground were just as effective as they were at San Diego State. But a hamstring injury has hindered his progress, and after he aggravated it last week the Broncos will be cautious. Grade: Incomplete CBSSports.com 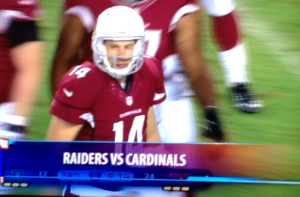 Ryan Lindley is one of the best quarterbacks to walk the halls of Montezuma Mesa and is getting his chance to play in the NFL on the Arizona Cardinals. To refresh everyone’s memory Lindley was selected in the 6th round (185th overall pick) of the 2012 NFL Draft. Lindley has been doing a great job in Arizona and is fighting for a spot on the Arizona team.

Right now the big addition to the Arizona Cardinals was quarterback Kevin Kolb. He has played very bad so far this preseason.  John Skelton is getting the start in tonight’s Cardinals game as he also looks to take over Kolb’s starting job. Richard Bartel is the 3rd string QB attempting to make the squad. If Lindley would like to remain in the NFL he has to have a great game tonight. David asked the Cardinals writer from CBS Sports the following question:

@sandiego_sports I think he’ll be on the club. Whiz doesn’t like keeping a 4th QB on practice squad. Not enough reps. Lindley’s intriguing.