It all started in June when the LA Kings shocked the hockey world by winning the Stanley Cup as an eighth seed. How many times has an eighth seed ever won anything? To be exact, the 2012 Los Angeles Kings are the first and only eighth seed to ever win a championship.  These things only happen in LA – the city of storybook endings.

Then there were the Lakers.  First came Steve Nash. The Dwight Howard saga followed. After months of panic and mayhem LA got its man. A four-team trade, which included twelve players and several draft picks, sent a reluctant Andrew Bynum to Philly and saw the explosive Andre Iguodala pack his bags for Denver. Miami had little time to enjoy the pleasure of their latest and first championship with the “Big Three” as the entire balance of the NBA shifted right back at LA.  The deal not only added the disruptive Howard to fill out the paint, but also enhanced the bench, a major weakness for the Lakers in ’12, in the additions of Chris Duhon and Earl Clark.

The Clippers aren’t looking too shabby either as they look to return most of the players from their recent successful season. Last off-season brought the highly touted Chris Paul to L.A. where he threw his trademark lobs to Clipper big men, Blake Griffin and DeAndre Jordan. Paul was not the only newcomer last year as the Clips also added veterans Caron Butler and Chauncey Billups. The Clippers definitely showed it to the Lakers that they are no longer the slouches they have been in years past. This year’s team looks to be even stronger with the vital acquisitions of Jamal Crawford, Grant Hill, and Lamar Odom. This gives the Clippers one of deeper benches in the NBA. 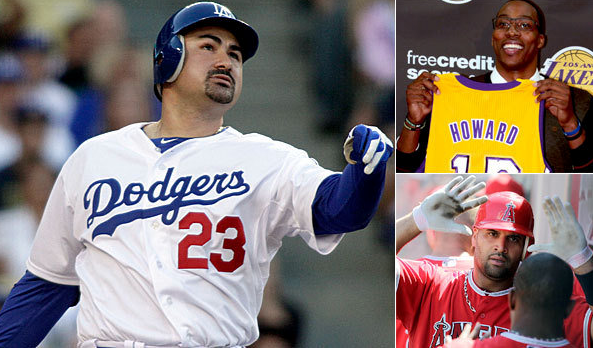 L.A.’s recent fortune in the trade market and off-season moves goes well beyond the basketball court. On to the baseball diamond, the sports year began with the Angels making several colossal moves. In December, the Angels shocked the baseball world by signing both three-time MVP Albert Pujols; the off-season’s most sought after player, and C.J. Wilson, arguable the best pitcher on the free agent market. Then came rookie stud Mike Trout. Only 20 years old at the start of the season, Trout currently leads the league in batting average (.330), OPS (.954), and stolen bases (44). Trout has all the capabilities of a five-tool player as he has made countless wall scaling grabs and hit his share of home runs this year (25). This kid is well on his way to superstardom.

As we all know, the Angels are not the only L.A. team making noise. The Dodgers came out of nowhere two weeks ago when they executed a nine-player deal that landed them current and formal all-stars Adrian Gonzalez, Carl Crawford, and Josh Beckett (along with the versatile Nick Punto). In one blockbuster move, the equilibrium of power shifted from the AL to the NL. For the Red Sox short term it may look like a rotten deal, but in the long haul they are saving a tremendous amount of cash. By the numbers, this is the first ever transaction in baseball history where two or more of the players had at least $100 million dollars left on their contracts (Crawford and Gonzalez). For the first time in nearly a decade it looks like the Sox may be spending their next few years in the dweller. However, in five years we may look back in awe at the genius of the Red Sox management. Trust me, it won’t be the first time. For now, the Dodgers find themselves four and a half games back of the Giants, but they are still the team to look out for come October. With a rotation that runs deep with Clayton Kershaw, Chris Capuano, and Beckett, and a line-up featuring Gonzalez, Hanley Ramirez, Matt Kemp, and Andre Either in the middle, this is a team you don’t want to face in a five game series.

And then there’s football.  LA, has been fighting for an NFL team over the last decade (most competitively at my hometown Chargers), but who needs one when you have one of the top NCAA football teams around? USC, coming off a 49-10 beat down of Hawaii, comes in as this year’s favorite to capture a National Championship. The Trojans look strong early as they bring back most of last year’s team, including Heisman favorite Matt Barkley and the nation’s most deadly receiving corps. Penn State transfer, Silas Redd, will definitely help the team in the running game as they look to capture their first National Championship since the 2005 Orange Bowl. Let us not forget that even UCLA has begun to show signs of life with new coach Jim Mora Jr. and new starting quarterback Brett Hundley.

Suddenly, pro sports in Los Angeles are an abundance of riches. We don’t do trades here. We do blockbusters.

It’s a great time to be an L.A. sports fan.  There will be plenty to watch this year as the Kings defend their title, the Lakers attempt to make the climb back to basketball immortality, the Angels and Dodgers try to play their way deep into the October nights, and USC and UCLA take on college football. Things look to be burning bright for the City of Angels as 2013 (and beyond) looks to be the beginning of another classic Hollywood story.

Hello my name is Nick Robbin and I will be a freshman this upcoming fall at SDSU. I currently reside in Del Mar where I have lived my entire life. I am very excited to write for San Diego Sports Domination and hope it will help me in my journey of working in the sports industry. I aspire to be a sports agent and I believe my time working with the SDSU Men’s Basketball team and writing for the SDSU blog will prove beneficial in the large scheme of things. Now to my sports background, I mostly follow basketball and baseball, but I am also interested in football. The three primary sports in America. I root for the Lakers, Yankees, and Chargers as I am a huge Kobe Bryant and Alex Rodriguez fan. I hope my writing style can add to this already very talented staff.