Promotional video followed by game information and our game breakdown! 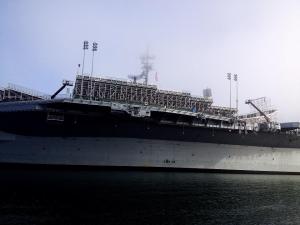 The game was placed in jeopardy due to a lack of financial sponsors for the game. The concert that was said to talk place has been canceled along with all sideline events. Locally known the game would never be canceled because of local T.V. politics. San Diego Fox Sports came in and half of the residents have been unable to receive the new channel. San Diego Fox Sports placed their name into the event knowing it could not fail. We are assuming that Fox Sports at the corporate level have gotten involved and have saved the event. The biggest local sponsor of the game besides Fox Sports San Diego is Northrop Grumman.

**Make sure you go to the bottom of the page under team rosters and vote for your favorite team!!**

The game is set to tipoff at 1:00 p.m. PT Sunday and will be televised nationally by FOX Sports Net. The Fox broadcast team for “Battle on the Midway” will be Hall of Fame broadcaster Dick Enberg, five-time NBA champion Steve Kerr, Erin Andrews and Mike Pomeranz.

With weather forecasts suggesting a Friday evening outdoor game on the USS Midway would be a dicey proposition, sources now say that the Battle on the Midway will be moved to Sunday at 4 p.m. Eastern Time.The official announcement of the date change should come at 7 p.m. today, sources said. At that point, any further logistical information should be available. Syracuse.com.

San Diego has always been known as America’s finest city! There is always a chance in San Diego to get rain. The east coast gets snow in the winter and San Diego gets rain. We are going to have up to date weather forecasts right here on the page.

Our staff will keep the weather forecast updated everyday. If there is a chance of rain the Battle on the Midway will be moved to a back up location. The back up location is the Valley View Casino Center (formerly known as the San Diego Sports Arena) should the game be moved tickets would be released for the new venue. The ticket release would be some were in the ballpark of 8,000 tickets being released. If the game is moved we would assume an announcement one or two days before the event so either next Wednesday or Thursday we will know the exact location of the event.

Live Chat: San Diego Sports Domination Live Chat: Click Here
To live chat with us on Barc you are going to need to create a profile to be a part of the live chat. If you want to read what’s going on in the live chat you will be able to do so without having to make a profile.

San Diego State wants to avenge their loss to North Carolina State in the first round of the NCAA tournament last spring. The Aztecs in that game lacked height and the Aztecs return fully loaded with tons of height. San Diego State is entering the game on the Midway with the highest ranked freshman class in the history of the program with Winston Shepard (4 Stars), Matt Shrigley (4 Stars) and Skylar Spencer (3 Stars). The Aztecs also have the best transfer class in the history of the university JJ O’Brien (Utah), Dwayne Polee II (Saint John’s) and James Johnson (Virginia). James Johnson who transferred to San Diego State from Virginia is ineligible for the game due to the date of his transfer. Bellow we are going to provide a small bio of the player we believe will be the difference in the game for the San Diego State Aztecs!

Jamaal Franklin spent countless hours during the summer on the basketball court. Other college students his age would be partying or at the beach. Franklin spent his freshman summer learning everything he could glean from one of the greatest men to don an Aztec jersey, Kawhi Leonard. Franklin is the first man in the gym and the last to leave. Many of his coaches would agree to the fact that Franklin lives in the gym. After some tough losses, this season on the road Franklin would return to the gym and perfect his game. If, he shot horribly, he would shoot until he was perfect. This is a man who is bound for greatness! Yes, Franklin can dunk like you have never seen before and shoot the three. For the Aztecs to mesh this upcoming season, Franklin is going to have to tone down the crazy throw down show and lead the Aztecs to victory. Franklin is one of the teams fire crackers, and this up coming season I can see Franklin becoming one of the leaders of this Aztec squad.

Below you will be able to read an interview that I conducted during my time with FanSided’s SDSU website. We have connected and interview each other about the upcoming game. If you would like to read the newest interview please click here.

Interview about Syracuse with FanSided’s Syracuse site (Inside The Loud House).

In Side The Loud House: Syracuse fans know that SDSU is a very talented basketball team with one of the best coaching staffs in the country. If there is one thing Syracuse fans appreciate after having Jim Boeheim for 36+ years, it is loyalty to a school, and Steve Fisher is as loyal as they come. Throw in the 30 win season you guys had a few years back, and it is safe to say the Aztecs absolutely have ‘Cuse Nation’s respect. Coach Boeheim has been talking SDSU up big time since the game has been announced, and in Boeheim we trust. Syracuse fans lost a home football game to USC this season  for New Jersey at MetLife Stadium and are upset, but given the circumstances surrounding this game Syracuse fans are not too broken up about playing across the country.

In Side The Loud House: There are a few players that Syracuse fans have their eyes on heading in to next season. Last season showed very balanced scoring for Syracuse, with leading scorer Kris Joseph only averaging just over 13 points per game, so offensively we might see more of the same this year.

While the Orange have some tremendous freshmen coming in this season, I will highlight the returning players. Starting at the top, senior Brandon Triche  has been starting since his freshman season. Triche is a good shooter who deferred a lot last year, and plays unselfish basketball. If he can be consistent and take charge offensively, he will definitely be a star this season. Junior CJ Fair <video>  is another player that people have their eye on, who had a great sophomore season last year where he would take the game over at certain stretches of games. Fair also plays tremendous defense and can rebound. The most hyped up player heading in to next season however, has to be sophomore Michael Carter-Williams. <Video> Carter-Williams is a 6’5 point guard who has unbelievable athleticism and passing ability. Carter-Williams had limited playing time last season due to being behind veteran guards, but has already had a comparison drawn between him and Thomas Robinson  from the standpoint of having a breakout season. Fans are very excited to see Carter-Williams get quality minutes this season, and have very high expectations for him.

San Diego State men’s basketball head coach Steve Fisher will participate in the Battle on the Midway Coaching Clinic set for Thursday, Nov. 8, from 6-10 p.m. PT aboard the USS Midway. Joining Fisher will be Syracuse head coach Jim Boeheim, former SDSU and NBA star Michael Cage, former NBA head coach Don Casey and current NBA D-League coach Reggie Theus. The clinic is $55 in advance or $65 at the door. Coaches interested can register online at BasketballCoach.com or mail checks to Midway Coaches Clinic, 2048 Hills Lake Drive, El Cajon, CA 92020. There is a 2-for-1 deal if you sign up by phone. The phone number is (800) 207-8065. Parking for the event is available next to the USS Midway (910 North Harbor Drive, San Diego, CA 92132). Check-in for the clinic runs from 4-5 p.m. PT and those participating may view the team’s shootarounds from 5-6 p.m. PT. GoAztecs.com