San Diego State finished the season in the Mountain West with the best record in university history during the MWC era. The Aztec run defense which is the best in the Mountain West is looking forward to taking on the Cougar run game. The Aztecs are now 9-3 (7-1) after beating Wyoming behind the legs of the Aztecs run game (48 Carries for 400 yards and 4 touchdowns). We predict SDSU will come out on fire as they are looking forward to playing their old rivals BYU. The Aztecs will win this game. (According to Vegas the San Diego State Aztecs are 3 point underdogs). 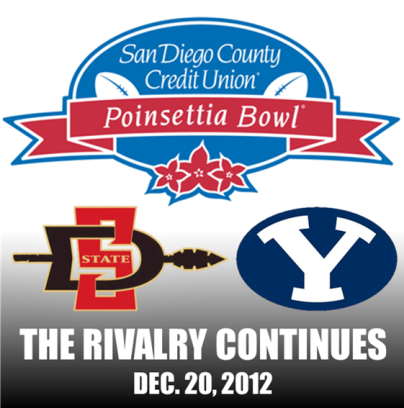 The Aztec defense is lockdown on the running game and does need work with passing.The Aztecs offensive is unstoppable with the double tangent of Walter Kazee and Adam Muema. The two backs are averaging near five yards per carry on the season. Behind a great passing attack lead by quarterback Adam Dingwell and should be All-American tight end Gavin Escobar.

Now lets break down the BYU schedule up to this point in the season. BYU lost to a few great squads including Boise State, Oregon State and Notre Dame. The Cougars also lost to two good squads in Utah and San Jose State. BYU beat a few good teams in Utah State and Washington State. BYU easily overpowered Georgia Tech, Hawaii, Idaho, New Mexico State and Weber State.The BYU offense is one of the middle of the road offense’s in the nation ranked as No. 65. The BYU defense is ranked 3rd in the nation in total defense. For a look at the nation stat rankings please refer to the chart at the top of the article.The BYU offense is going to have to play a flawless game in the turnover battle and the BYU defense is going to have to shut down the San Diego State run game if they want to have any chance at beating the Aztecs.

Fans are encouraged to purchase tickets through SDSU as it will benefit Aztec athletics.

San Diego State football season ticket holders and donors have until 5 p.m. PT Tuesday to purchase tickets and insure their priority at GoAztecs.com, over the phone by calling (619) 283-7378, or by visiting the Aztec Ticket Office at Qualcomm Stadium’s Window E between 9 a.m. PT and 5 p.m. PT.

Tickets for the general public go on sale Wednesday, beginning at 10 a.m. PT. They are available through GoAztecs.com, over the phone by calling (619) 283-7378, or by visiting the Aztec Ticket Office at Qualcomm Stadium’s Window E between 9 a.m. PT and 5 p.m. PT.

The SDSU tickets are $60 each. There’s also a tailgate package for $40 that includes a buffet with drinks, and another for $20 that includes one food voucher (different vendors will be available) and one drink ticket. Ticket Info from GoAztecs.com

Rocky was born in Provo. His parents went to BYU. Asked if he hates BYU: “Why would I hate them? My mom and dad wold hate me.” LOL