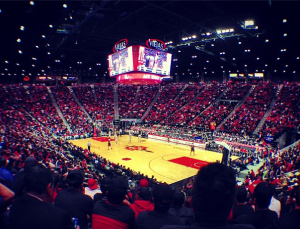 The Aztecs are still trying to improve with shooting from the floor and behind the arc. The Aztecs are shooting 44.3% from the floor and 32.8% from behind the arc. This team has a plethora of shooters and can blow out teams when they are shooting their best as they did against Arkansas Pine Bluff, UCLA, UCSB, first half of the Colorado State game, second half of the Nevada game, New Mexico and Fresno State game. The Aztecs need major improvement in the free throw game but have improved their free throw shooting average to 66.9%. The Aztecs have also been working harder this season on offensive and defensive rebounds. Rebounding is the number one weakness of San Diego State. The Aztecs have a ton of work to do in the rebounding game.The Aztecs have out rebounded teams this year 858 to 767.

The Aztecs are ranked 22nd in the USA Today coaches poll. The Aztecs did drop out of the AP Top 25 poll with the loss to Air Force. Being ranked 25th in the coaches poll makes it 26 straight weeks that SDSU has been ranked in one of the two major polls.The Aztecs starting five for Wednesday’s game will be Xavier Thames, JJ ‘O Brien, Jamaal Franklin, Chase Tapley and DeShawn Stephens. The line up could change before game day depending on how star point guard Xavier Thames’s back is doing. Once again the only San Diego State freshman who is red-shirting this season is Matt Shrigley. Look for Skylar Spencer and Winston Shepard to receive a lot of minutes in Wednesday’s game.

Highlights from last match up.