Make sure to check out our NFL Draft Bio on Gavin Escobar !! 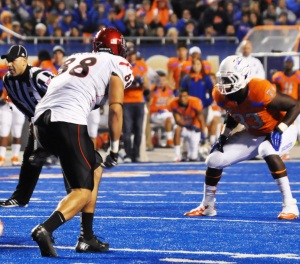 San Diego State Aztec Tight End Gavin Escobar is trying to leave an impression on coaches and scouts based on his performance in the combine and his pro day workouts. Escobar, standing at 6 feet and 6 inches and weighing 255 pounds finished his senior season at San Diego State with 42 catches, 543 yards and 6 touchdowns. Escobar is projected to go no later than the third round, many analysts have him as the third best tight end in this years draft class. Escobar ran a 4.84 in the 40 yard dash and a vertical of 32 inches at the NFL Combine. Although they are not outstanding numbers, Escobar has proven that he can catch the ball extremely well and is a deadly red zone threat. Escobar has a lot of upside and hopes to improve his draft stock. Gavin Escobar and fellow teammate CB Leon McFadden will have their pro day workouts on March 4th hoping to leave any last impressions on coaches and general managers around the league before April’s draft. Who’s to say Escobar won’t get drafted by one of our California teams, the San Diego Chargers or the Oakland Raiders, who are both in need of a young athletic tight end, but I guess we won’t know until the NFL draft in April.