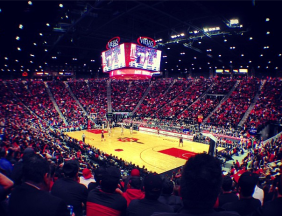 Many Aztec fans believe that San Diego State deserves to be ranked with a record of 26-5. The prior argument against ranking San Diego State was the ranking of the teams they have lost to UCLA, Colorado, Oklahoma State and Washington were all ranked ahead of San Diego State. That argument is now invalid as Oklahoma State and Washington have dropped out of the top 25. At the beginning of the week San Diego State was receiving votes in both the in AP Top 25 poll (13 votes good enough for 31st place) and USA Today Coaches Poll (20 votes good enough for 27th place).The Aztecs deserve to be ranked and will be ranked on Monday when they win the Mountain West Conference Championship.

Below are scores, stats, and videos from the Aztecs games at the Mountain West Conference Tournament so far!

Player of the game: Chelsea Hopkins who set a Mountain West Conference Tournament record for most assists in a game with 14 (12 assists in the first half).

1 Comment on SDSU Basketball: Women’s Basketball Should Be Ranked!