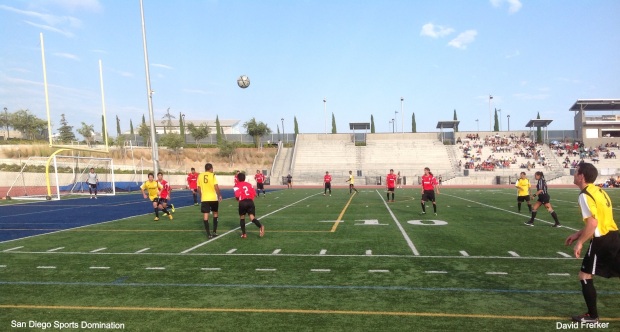 This game can be sum up by two words, missed calls. Only two members of this four member officiating crew had ever officiated a NPSL (National Premier Soccer League) match.

The biggest missed call of the first half was a foul in the box by the Storm. Using football language the foul looked exactly like a house collar tackle. The Flash player was dragged down from behind in the box. The Flash players begin cursing out the officials and had to be pulled away by fellow teammates. The Flash player told he refs “This is how you lose games. Three missed calls in under 15 minutes are you kidding me.?”

Throughout the game fouls with less contact have been called against Flash players. The Flash were able to regain composure as they made more deep runs into Storm territory. Ten minutes later the Storm had two players “Flop” fall over after being run into by Flash players the refs thank god did not call any fouls. You could hear Storm fans yelling obscene words at the players and officials. The Flash got the equalizing goal from #8 Andy Ortega in the 34th minute. The Flash headed into halftime with a 1-1 tie.

San Diego Flash goalkeeper Cameron Riley was hurt badly during contact in the box. He had to be carried off the field by the Flash trainers and coaching staff. The Flash backup goalie Carter Phillips was substituted into the game. A major call going against the Storm was called in the 78th minute of the game. The Storm was awarded a penalty kick after a Flash handball in the box. The Storm made the kick but had the goal appeared to negated by an encroachment call.

This ended up being the call of the game. After the game ended I went and asked the officials what happened. A Storm player was assigned to take the PK. In his attempt, he stutter-stepped. At that moment, one of his teammates encroached on the area. This gave the referee the right to disallow the goal.

The Storm fans sitting in the stands were yelling at the officiating crew. Five minutes later the Flash received three yellow cards on major non calls. The Storm player managed to do the Lambeau Leap onto the Flash player and the Flash player was called for the foul and received a yellow card. The Flash were able to hold off the Storm in stoppage to earn the tie. The tie gave the Flash one point in the NPSL Standings. The Flash have lived to die another day. Man of the Match was San Diego Flash Julian Stahler.

This is the official roster for tonight’s game.

This was the result of the San Diego Flash PK in the 72nd minute of the game.