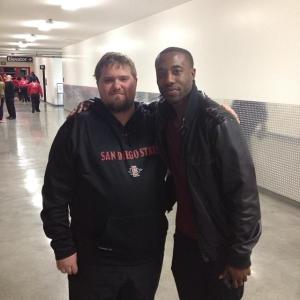 To begin the story, I would like to give you some background information on D.J. Gay for those visitors to our site that know nothing about him. D.J. is not his real name it is just a nickname he was given as a child. His full name is Darnley Earl Gay the 3rd. D.J. was added because it is Darnley Jr., which was shorter and easier to say. [“D.J. Gay’s first basketball team was at Branford Rec Center near his home in the Sun Valley neighborhood of Los Angeles. He was 8. His team won the league and he was one of its best players, but he wasn’t chosen for all-stars.”] Who was the coach of this team one would ask? That answer would be his father Don Gay. He was not added to that team due to his lack of effort and you can read the story that is hyper-linked at the end of this paragraph.

That was the breaking point for D.J. [“I told myself, ‘This will never happen to me again. I will never not make another team.’ That’s where it started.”

D.J. went to high school at John H. Francis Polytechnic HS, which is located in Los Angles, California. Arizona State (ASU), Washington State (WSU) and San Diego State (SDSU) were recruiting D.J. out of high school in 2007.  D.J. was one of the smaller Point Guards  (5’11 – 165) according to ESPN). He was ranked the 21st best point guard in the nation during his senior year in high school making him one of the best point guards to be signed in 2007. D.J. was given a 92 overall rating by ESPN giving him 4 out of 5 stars, making him one of the highest overall rated players in the Division One era to come to SDSU.(Since 2007  other 4 star commits to attend SDSU: Kawhi Leonard 92-4 Stars and Billy White 91- 4 Stars.)

David: —-“D.J. what made you commit to San Diego State University.”

D.J. Gay came to San Diego State University not knowing the impact he would have on the campus by the time he would graduate.

”Over the course of the last four-plus years, the Sun Valley Poly High graduate has transformed himself from an underrated prep basketball prospect into a big-time college hoops contributor at San Diego State…….“D.J. always had a fire burning inside of him, and you know what, that was a product of people telling him that he couldn’t do this or that,” Poly coach Brad Katz said. “It never failed, there was always some kind of knock on him, a lot of times, the stuff came out of left field too.“Say what you want about him, but there’s one thing you can’t take away from D.J. and that’s his heart. Since he left us, he’s put in a ton of work, more than people even know. He has quieted all of his critics in the process and I think that’s the best part about his whole situation.”

D.J. Gay was the unofficial leader of the best Aztecs team in San Diego State history and was named Captain for 2010-2011. D.J. has made some of the biggest, most memorable plays in San Diego State History from last second shots to give us the win, to his Half Court shot at the Pit. To re-live those memories talk a look at these links.

The Aztecs went 32-3 that season: the best record in the history of the program and won their first two NCAA tournament games. ( Northern Colorado University and Temple in overtime) As Aztec fans we hoped that this unbelievable season, “The Sweet Season” as dubbed by the University, would never come to an end. But unfortunately the Aztecs lost in the Sweet Sixteen to the eventual NCAA Tournament Champions UCONN.

The magical season has ended with SDSU’s first NCAA tournament win over Northern Colorado, SDSU’s second tournament win seen in the picture: In overtime  against Temple in TUCSON, Ariz. The Aztecs then lose a heart-breaking game to UCONN which put the brakes on the Aztecs season for good. That would be the last time the best basketball team in SDSU history were together as one on the court. Kawhi would be drafted in the First round of the NBA draft. D.J would then become the next Aztec to play in Professional Men’s Basketball in Slovenia for a team called Partizan Helios. Malcolm Thomas played South Korea for Hyundai until the NBA lock out ended and was given his chance to play in the NBA. Malcolm is now on the San Antonio Spurs. Billy White was invited to the Miami Heat’s camp in which he would be cut  from the team. Brian Carlwell is playing basketball in Australia.

When any sports season has come to an end, we always look back to that year and ask ourselves the question; What could have been if SDSU would have beaten UCONN, would we have won the NCAA Tournament? Well I asked D.J. Gay a similar question:

David Frerker: Do you ever look back to last year and think wow, we really made it that far? Are you mad that you didn’t go further?

D.J. Gay: “There isn’t a day that goes by that I don’t look up a video, article, highlight’s of last years run. Looking back at last year always reminds me why I love the game, especially when I’m having bad days out here in Europe. I would have loved to win the championship last year and I think we had a team to do it, but things don’t always go the way you want, but I am happy with all that we accomplished.”

Coach Fisher is one of the best coaches in the history of San Diego State University and I wanted to get D.J. Gay’s take on coach. I also wanted to know if D.J. could talk to a top recruit what would he tell him:

David Frerker: How much did Coach Fisher affect your college career? If you were talking to a 5 Star recruit after last years memorable season, what would you tell him about Coach? ”

D.J. Gay: Coach Fisher had a major effect on my college career. I would tell the recruit that Coach Fisher is a great coach but a better man. He will always have your back, always believe in you, always has his door open. He understands life is bigger than basketball and goes out his way to emphasize what it means to be a good person. He brings in special speakers, challenges you to become better, and the best thing about him as a basketball coach is that what he saw you doing that made him want to sign you is what he wants you to do for the team. He’s not a coach that is going to force you to change your whole game around and have you doing things you’re not use to. He will let you play.”

2011-2012 D.J. Gay is gone, SDSU needs someone to step up and run the point.Since this article is focused on D.J., we are going to look at the man who would eventually be running the point at SDSU [The Heir apparent to D.J. Gay:  Xavier Thames, San Diego State, G – Thames appeared in each of Washington State’s 31 games as a freshman in 2009-10, when he averaged 4.6 points and 1.2 assists. San Diego State Coach Steve Fisher had recruited Thames out of high school, so he was familiar with his game. The Aztecs lost senior guard D.J. Gay to graduation.] CLICK HERE As the season is winding down I wanted to ask D.J. about his predecessor X Thames:

David Frerker: How much did X Thames learn from you while you guys were both at SDSU? Can you see yourself in X when he plays? If you have been following the team this year how far do you think they will go in March? And what do you think the Score will be tonight for SDSU vs. UNM?

D.J. Gay: “X Thames is a smart player and last year he was always open to learning and he was always asking questions. X and I are pretty different players and X is more athletic than I am and he prefers to slash to the basket as where I was more of an outside guy. But where we are similar is that we both are not afraid to make big plays when we need to, we thrive off of pressure. X will continue to grow and become a great Aztec. I have been following the team and have been able to see many games out here, I believe with the right seed and right matchups, this team is definitely sweet 16 capable. As far as the game tonight, I know SDSU and UNM usually have high scoring games, I think it will be another high scoring game with the Aztecs winning by 12, 78-66.

D.J. Gay is in my opinion the best point guard in the history of SDSU, but was unable to get drafted into the NBA. I want to thank D.J. Gay for taking time out of his busy schedule to sit down for a while and answer my questions. You, D.J., are a true Aztec For Life, I along with the City of San Diego, Aztec fans, and alumni all over the world will never forget what you have done for San Diego State University. And the amazing season you were apart of, has brought national respect back to the San Diego State Basketball Program. To end this paper, here is what D.J. Gay wanted family and friends at home to know about how he is doing in Europe:

David Frerker: Most of these questions are things my fellow students at SDSU wanted me to ask you, is there anything you would like to tell us about your adventures in Europe?

D.J. Gay:”I have many stories, and many things to say about it, but the thing I have come to realize is this experience changes your whole outlook on life. Living 10 months in a whole different culture, you come to appreciate the things you really have and realize the things you thought you needed but don’t. I am the only American on my team and the only person on the team fluent in English, and I’m living in a very small town. What I’m told is the first year is the hardest, and I’ve been tested and reached many different breaking points, but you learn to take one day at a time and keep your eye on the goal.