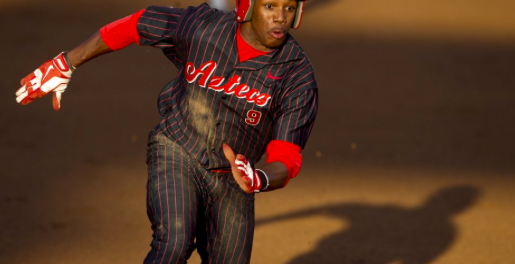 The Aztecs’ Greg Allen eyes third base as he successfully steals it in the first inning at Tony Gwynn Stadium. Photo by Hayne Palmour IV

The SDSU baseball team opens their 2014 season tonight, February 14, at 6 p.m. against new Mountain West Conference foe San Jose State. The Aztecs come into the season with high expectations after winning the 2013 Mountain West Conference Tournament and advancing to the NCAA Regionals in Los Angeles. The team has been voted as a co-favorite to win the Mountain West, tied with New Mexico. They finished fourth in the 2013 conference regular season (15-15) and (31-31) overall.

The Aztecs return much of their talent from last year’s campaign, including junior pitcher Michael Cederoth, who was named to Baseball America’s preseason All-American third team. Cederoth had an impressive sophomore year, garnering 109 strikeouts in 95.1 innings, which earned him second team all-conference. Sophomore closer Bubba Derby, with ten saves a year ago, will likely see some time in a starting role. SDSU lost two key pitchers, Ryan Doran and Philip Walby, who combined to throw over 200 innings last year.

Offensively, they are led by leadoff hitter Greg Allen and senior second baseman Tim Zier, who were both named to the preseason all-Mountain West team by the league’s coaches. Allen, a Baseball America’s second team preseason All-American selection, had a breakout sophomore season leading the team in runs scored (51), walks (36), and stolen bases (25). Zier hit a team high .341 batting average and was 18-20 on stolen base attempts.

There are several newcomers to the 2014 squad. Spencer Thornton and Seby Zavala return to the team after redshirting in 2013. Also, four freshman pitchers join the staff, who hope to contribute solid innings. Andrew Brown, a freshman outfielder, comes to SDSU after being named to first team all-league at the Rock Academy in San Diego all four years.

Tony Gwynn, in his 12th season as head coach of the Aztecs, hopes his team can get off to a strong start similar to last year. SDSU swept crosstown rival No. 12 USD on the road in a three game series to start the year.

“As a coaching staff we are excited about the team that we have and the possibilities of what could happen,” Gwynn said.

The season opener against San Jose State will be streamed live online on the Mountain Digital Network. Visit GoAztecs.com for the link to the stream. The Aztecs’ first home game will be played Tuesday, February 18, against Loyola Marymount University at 6 p.m. at Tony Gwynn Stadium.