Written by Benjamin Dull.  Read his blog for more from the Vegas Summer League and follow him on Twitter.

Seeing two guys who played for your favorite college team, one as recently as this past season, in Vegas at Summer League is dangerous.  If you come and watch long enough, you’ll be tempted to overreact to big numbers and curse the hyped guys that aren’t playing up to your standards, whatever they are.  I wasn’t all that thrilled to watch my Lakers, so I was glad to have two former Aztecs there to root for.  I just had to be sure to keep my sanity in my 12 days here.

I’ll start with Thomas, who I covered quite a bit here.  At this point, Thomas is at least a blip on the D-League/overseas talent radar for NBA teams.  He’s made 5 NBA stops already, but as I covered in the piece linked above, he’s added an important tool – the NBA 3 point shot.  He’s on a non guaranteed contract with the Jazz, meaning he’ll have to keep fighting for a roster spot in training camp.

Starting all 5 games for Utah, Thomas shot 26-50 from the floor.  He made 4 of his 8 tries from deep.  Some official stats over that span in 23.8 minutes per game: 11.8 PPG, 5.8 RPG, 2.4 APG.  He blocked 6 shots, but the number easily could have been higher.  For four of the games, he spent much of his time on the floor with 7’1″ Rudy Gobert.  You can’t have both guys playing a bit of center field and hunting blocks.  The longer Gobert, who naturally spent more time near the basket guarding centers, got that freedom. 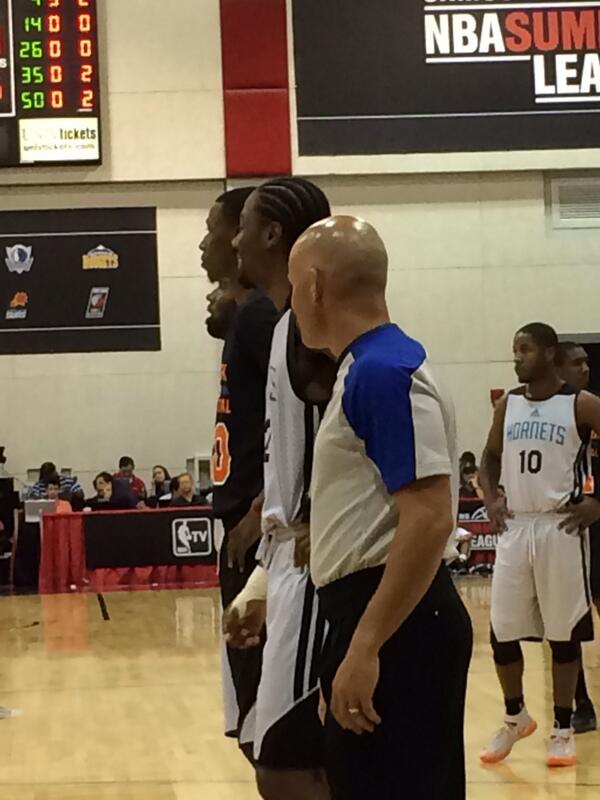 There was reasonable buzz surrounding Davis, but that was mostly made up of wows because the audience didn’t know his name.  I continued to dig for bits on Thomas, too, but there’s not much there yet.  Looking for scraps on Twitter led me to plenty of positive reaction from fans of both teams, basically saying, “I’d take that guy on our roster.” 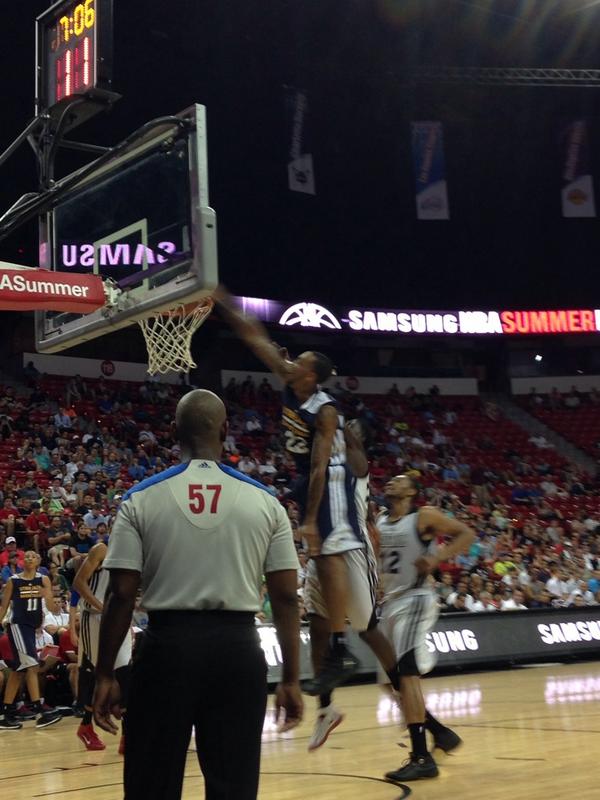 I expected to hear Kenneth Faried comps for Josh Davis, but haven’t seen one yet.  I absolutely hate player comps.  However, I can’t make them go away; too many fans love them.  And I get it – they’re great to open up debate and spark discussion.  Davis measured out similarly to Faried, but there are some differences between the two.

Faried does a ton of his damage on the break with Ty Lawson.  They both are notorious rebounders, but I like Davis’ chances in switching onto a perimeter guy more.  Faried has the weight advantage, but is only 14 months older than Davis.  We’ll have to wait and see if Davis adds much to his frame to help him bang around near the basket.

But there’s a perception problem with Faried among casual NBA fans.  He “made it” and has proven useful in the league, but good post up guys in the league probably look at him like a revolving door.  No matter how much he hustles and competes, he’s still lining up against Zach Randolph, Blake Griffin, LaMarcus Aldridge, et al.

Fitting in an undersized rebounder is a balancing act that most coaches probably don’t want to deal with right now; there’s already enough to wrestle with.  Here’s the catch: It is probably worth it if you have enough patience to give it a shot.  Think back to the 2012 first round series between the Nuggets and Lakers.  Denver took the thing to 7 games before the Lakers finally got by.  Pau Gasol and Andrew Bynum should have had their way in the post with any Denver big, but that alone won’t decide the outcome of a game.

Faried was playable in that series.  In fact, in their three wins he nearly averaged 12 points and 12 rebounds.  He had 25 offensive boards in the 7 games.  Offensive rebounding is huge, especially when your team isn’t as potent offensively.  Evidence 1: Roy Hibbert’s absolute ownership of the offensive glass against Miami in the conference finals in 2013 pushed that series to a game 7 (along with the efforts of Paul George, of course).  Any team would be wise to give Davis a shot.  I’d really like for Dallas to give him a spot in wake of the DeJuan Blair sign and trade.

Malcolm Thomas might be a better fit for the Faried comp.  Their size, wingspan, standing reach, right on down to their leaping numbers are very similar.  Think about this question: If Denver could magically give Faried an additional skill, wouldn’t they chose an outside shot 11 times out of 10?  Thomas might already be that for a team and he doesn’t even have a guaranteed contract!

Both of these guys are outstanding to watch because they move the ball.  They can pop out and be a pivot point for the offense from the top of they key because they understand that their job in that spot is to just swing it or initiate a dribble hand off.  In addition, both guys showed a clear understanding of the way the floor is spread in today’s pick and roll NBA.  Thomas and Davis were able to attack with a dribble then swing it across the floor to a guy on the weak side.

All players are unique, but Faried is a good reference point for both.  Davis plays the game with the same ferocity, but he has more off the bounce shiftiness to him, which got him to the free throw line time after time in Vegas.  Thomas can be a big to get out and run the break with a dynamic guard and block some shots on the other end, but he has also improved his jump shot.  That means he can be a pick and pop guy with your lead ball handler or slide up to the top of the key and spot up while your freight train center comes crashing down the lane.  Both options scare the heck out of the opponent.

Teams really can’t go wrong with either guy.  Both went undrafted and have been available.  Thomas knows he’s headed to Utah for camp, but who knows what will happen beyond that point.  They are already committed to three bigs – Derrick Favors got paid, a decision needs to be made on Enes Kanter, and Rudy Gobert if he gives the same effort we saw in Vegas against much stronger players.  I’m sure Charlotte is happy with Davis, but they have Big Al, 3 young bigs, and stretch four possibilities with Marvin Williams.  They might add perimeter help or a big center with their final roster spots, so who’s got room for Davis?  Both guys did their part – let’s find out who saw the same things we did.