While I’d like to say that my infatuation with writing about football is only a phase, I’d be lying (and likely fooling no one). Instead, I find that it’s much easier to welcome my pigskin addiction with open arms, and I feel compelled to encourage my fellow fans to do the same. Read on for my tips on how to properly embrace (and foster!) your inner football fan. 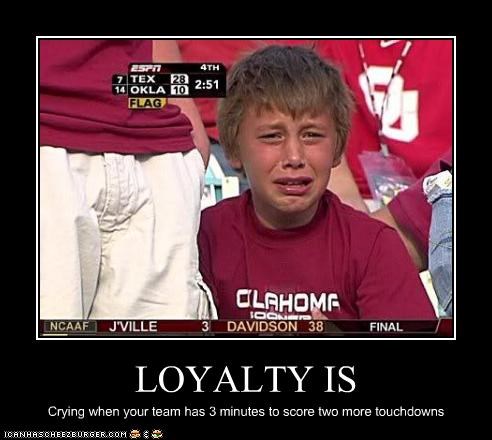 Note that I didn’t say be an opportunistic or fair-weather fan (or…gag…a bandwagon fan). Pick a team–literally any team–and stick with them like Hillary stuck with Bill. Do not abandon your chosen-ones no matter how rough the times may get. This means rooting for your team despite the following: they are having a terrible season (or seasons), they have terrible players, or they are the Dallas Cowboys. And hey, win or lose, there’s always booze (or nachos).

After you have selected your team, get to know them. Amass their statistical knowledge (past and present) like Walt Disney collected Oscars. Learn about their greatest coaches, players, seasons, and scandals. You need to love (yes, love) your team, and that means accepting the good with the embarrassing. Once you have a basic knowledge-base to draw from, you will be able to engage in the occasional heated discussion about why your team is the best. Nobody wants to be caught empty-minded in the middle of a my-team-is-better-than-yours hate-raining rap-battle.

It will be subtle at first. You’ll notice that your wardrobe has expanded marginally to include a team t-shirt or maybe a logo-emblazoned hat. And then you’ll be the proud owner of some sort of “officially licensed” merchandise (likely a jersey) and perhaps a pair of thematically appropriate socks. Eventually, you’ll realize that every game-day outfit you own has a coordinating wig and “Defense!” sign . Don’t be afraid–it’s supposed to be like this. Embrace the change! This material metamorphosis looks different for everybody. You may look like this…

None of these examples are more “right” than the others (this isn’t a multiple choice test). It is worth noting, however, that you must wear your outfit with pride (like all of the above), otherwise, you’ll just look silly.

In addition to having a thorough knowledge of your favorite team (see step 2), it’s imperative that you also make a conscientious effort to uncover the shortcomings in all opposing teams. This weakness could be a quarterback.

Or the team themselves.

Being a dedicated football fan is not for the faint of heart. There will be tears, divided households, and teams that fail to actually show up for the Super Bowl despite being physically there (lookin’ at you, Denver). However, very little competes with the camaraderie that is forged through nights centered around pizza and screaming at the TV like it’s your job. So go all-out this season and embrace your inner football fan–you can thank me for the encouragement later.

Julia Randall is stoked that the NFL season is once again upon us! When she’s not obsessing over her fantasy picks, you can find her pursuing her recent infatuation with Muay Thai.