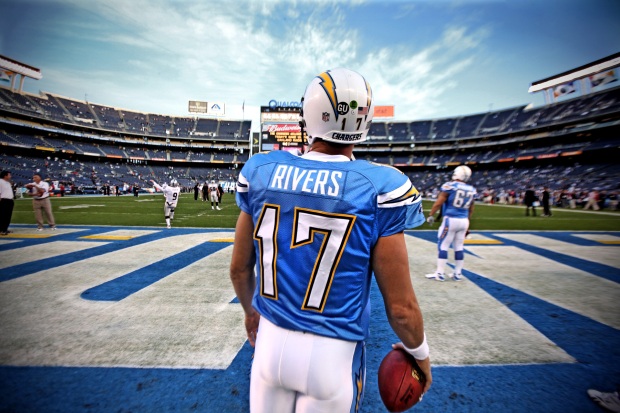 Of the 58 NFL MVP awards handed out over the years, 37 of those have been awarded to quarterbacks. This season, an early standout for the 2014 recipient is Chargers quarterback Philip Rivers. His performance in the 2013 season was impressive enough to earn him a spot among the best quarterbacks in the NFL. Rivers and the Chargers have already made an impression, standing 2-1 against teams who all had top-10 defenses last season.

When the Chargers played the Seahawks, Rivers had his work cut out for him. Seattle arguably had the best defense of the 2013 season. The Hawks are known for deconstructing an expertly crafted offense and making the quarterback look like he’s running plays in a bounce house. To combat this, Rivers threw for an impressive 284 yards against a team that last season, only gave up an average of 172 yards. He also boasted a 75% completion rate (shout out to Antonio Gates!), which proved both impressive and effective. The Chargers went on to beat the Seahawks 30-21.

Undoubtedly, Peyton Manning will prove to be one of River’s biggest obstacles on his way to the top. Despite being last year’s MVP recipient, Manning is off to a statistically slower start this year. Although the Broncos put up a noticeably better fight against Seattle last week (as in, they actually showed up and played), Denver couldn’t quite pull it together the way that the Chargers did. With Manning coming up short, the Charger’s quarterback has some extra room to showcase his talent.

The battle for MVP won’t be a runaway; the top contenders are all heavy hitters. Aside from Rivers and Manning, Luck, Brees, Brady, Ryan, and Wilson will all be battling for the top spot. Although it’s still early in the season, the Charger’s quarterback has wasted no time putting his skills on blast. If you weren’t talking about him before, Rivers has made sure that you know who he is now.

Julia Randall is stoked that the NFL season is once again upon us! When she’s not obsessing over her fantasy picks, you can find her pursuing her recent infatuation with Muay Thai.