After a four-year absence, the San Diego Chargers returned to the playoffs in 2013. After posting a 9-7 record for the season, the Californian outfit were granted a wildcard, going on to beat the Cincinnati Bengals 27-10 their first win in the playoffs since 2008 before losing 24-17 to beaten Super Bowl finalists Denver Broncos in the AFC divisional playoff.

There has never been a Vince Lombardi trophy situated in the trophy room of the Chargers; their 1994 49-26 defeat at the hands of rivals San Francisco is the closest they’ve come, and it seems unlikely that will change this season.

It would be naive to think that the Chargers are going to the Super Bowl but, if they make it to the playoffs, then anything is possible. However, getting to the playoffs is easier said than done as the AFC is notoriously difficult.

In coach Mike McCoy the Q residents have a very apt coach, and one of the more exciting managerial talents currently in the game; his maiden season in the hot seat proved as much. After an underwhelming 4-6 start the Chargers clicked, going 5-1 for the final six games. An attack-minded coach, McCoy brings a mentality where he is very happy just to outscore his opponent, very much buying into the philosophy that attack is the best form of defence. But what has helped McCoy is his work with Denver Broncos coach John Fox, who is one of the best defensive minds in America.

McCoy has gained invaluable defensive knowledge and will put it to good use this season, especially when he faces off against his old work mate. Last season only 11 of the 32 sides scored more points than them while just 10 sides conceded fewer, and that is a stat that is more than likely to be improved upon this season. McCoy has cut his teeth. He has found the perfect melange of attack and defence and the players seem at ease around the 42-year-old. In him, the Chargers have a guy who is more than capable of leading them into consecutive playoff appearances.

Talent is plentiful in the Chargers side. Quarterback Philip Rivers, a graduate of the class of 2004, returned to form in 2013. The two seasons before, the 32-year-old threw a combined total of 35 interceptions and had an average rating of 88.65, leading many people, quite rightly, to think that he was on the way out.

However, the Alabama lad has undergone a resurgence under McCoy, who has changed the whole passing game, posting his best season for the side in his 10-year career, accruing a rating of 105.5. So many sides are let down by their QB but in Rivers the Chargers have a game changer, just ask the Kansas City Chiefs. 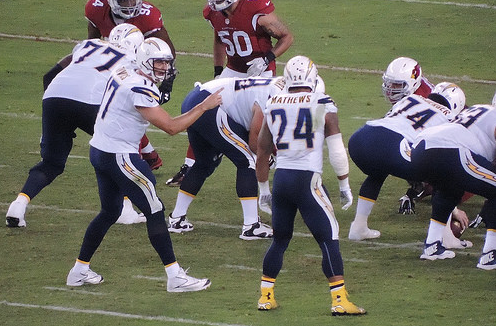 Besides Rivers there is Eric Weddle, who has been a constant presence in the middle since 2008, and it is him who is the glue that holds the defensive team together. Weddle, like Rivers, was a Pro Bowl selection. Keenan Allen, last season’s rookie of the year, was an absolute steal for a third round pick. Chargers fans will be hoping for more of the same from him again this season. A very good route runner and catcher of the ball, Allen is the perfect target for Rivers to enjoy picking out. They are just two of many. San Diego have a talented roster, especially in regards to attacking.

It should be a good season for the Chargers; a narrow loss to Arizona should not be of too much concern while the 30-21 victory over Super Bowl champions Seattle makes for brilliant reading, as does their recent 22-10 victory against the Buffalo Bills. The Chargers will be going to the playoffs and who knows; from there they have a succinct chance of progressing all the way to the Phoenix Stadium.

2 Comments on Charging to the Playoffs?