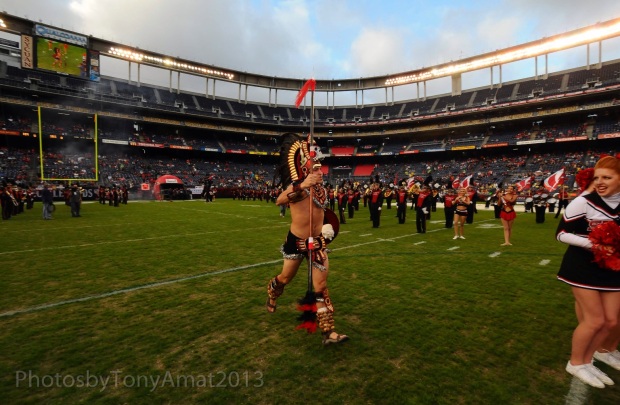 WHEREAS, the continued use of the name “Aztec” and the “Aztec Warrior” mascot perpetuate harmful stereotypes of Native Americans, including the notion that Native Americans are innately violent, dangerous, and “savage” which is demonstrated by the Aztec Warrior’s aggressive body language, the Aztec Warrior’s use of a spear at special events, the use of a spear on the SDSU Athletics Logo which is printed on uniforms and SDSU memorabilia, and the slogan “fear the spear”; … (LINK)

This is my favorite counter argument. If the Aztec Warrior is so racist then why do we have multiple Native Tribes sponsoring our University? Yes folks I said the word multiple Native Tribes. Viejas Arena (originally Cox Arena) renamed in March of 2009. The Viejas Band of Kumeyaay Indians acquired naming rights to the arena (2009 – 2019) at a total cost of about $6 million dollars which would be paid out over the 10 year lease.

The vision of the Sycuan Institute on Tribal Gaming is to be a leading source for high quality, practical research on tribal government gaming. (LINK)

You can find out more information about the Sycuan Institute on Tribal Gaming by clicking on the link provided above.

San Diego State also began creating an Aztec History program under direction of  San Diego State Football Coach Brady Hoke in 2008. Coach Hoke wanted to instill the winning attitude into the hearts of the Aztecs and what better way to instill that winning attitude than showing the students who the Aztecs really are. This class took student athletes back to the roots of the Aztec world and can help explain where the Aztec Culture came from. I am not sure if this program was ever put in place by the administration but I know some of the professors who were tasked to create this online class. This class was going to be mandatory for all San Diego State Student Athletes.

I have provided some links below for those interested in seeing the opinion of the students on the San Diego State University Campus.

1 Comment on Why San Diego State Deserves Its Aztec Warrior!