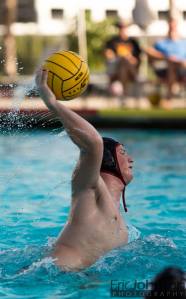 The SDSU men’s water polo team built upon it’s unblemished record this season by picking up another three wins this weekend (10/18-10/19) at UCSD’s Canyonview Pool. Each win was a decisive victory and over within a half.

The Aztecs took on UCSB’s “A” squad to start the weekend and dispatched them 16-3. Next, SDSU matched up with cross town rival USD who took a year hiatus from the water polo scene in 2013. Similar to UCSB, this contest was over before it started as SDSU cruised to a 17-2 victory. The last game of the tournament saw the Aztecs take on a developing and short-handed CSU Northridge team. CSUN is in their second year in existence as a recognized club water polo team and was consequently blown out of the water 22-3. With their three wins, the Aztecs improve to 6-0 on the year, a new club record.

SDSU will face #1 ranked UCLA next weekend (10/25) at UCLA in what should be the best two teams fighting for the No.1 conference seed. It will be a rematch of the 2013 conference championship in which SDSU dropped an electrifying 10-7 contest. If you happen to be in the LA area next weekend, come out and support your Aztecs men’s club water polo.

Photos from the @sandiegosilverbacks game against the @thecaliforniasharks are now on the blog. Link is in the bio. . . . . #Love #Football #Media #Sports #SportsBlog #Canon #canonsports #7dmarkii #canonphotography #SanDiego #sandiegofootball #semiprofootball #semipro #footballphotography