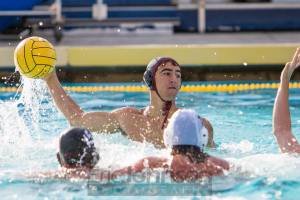 The SDSU men’s club water polo team added to an already historic season by winning the Pacific Coast Conference (PCC) for the first time in school history this past weekend (11/1-11/2). They defeated longtime rival Cal Poly San Luis Obispo 12-10 in what was a heated contest. The Aztecs entered the conference championship tournament as the 2nd seed, while Cal Poly was seeded 1st. Both teams were able to achieve such a high seed by going undefeated and taking down national juggernaut UCLA during the regular season. Here’s this weekend’s recap:

The Aztecs started the weekend by dispatching 2011 & 2012 national champion USC 12-6. SDSU dictated the tempo from the first whistle to the last. The next game saw the Aztecs take on UCSB “A” in what was a tougher match up than what the score suggests. SDSU handled UCSB “A” during the regular season by a score of 16-3, but the second time around featured a drastically improved UCSB team. At halftime, UCSB led 3-2, but trailed SDSU 7-3 after the third quarter. The final score was 9-4, with the victory guaranteeing a 2nd consecutive trip to the conference final for SDSU.

The championship game was not a matchup anyone had foreseen at the beginning of the season. In a league dominated by UC’s, this was the first time in PCC history where the championship game was played by two CSU’s. SDSU started and finished strong in this contest and was up 5-2 at halftime. Cal Poly did however, make a strong run at the end of the game but ultimately came up short by a score of 12-10. The conference championship punches SDSU a birth in the national championship tournament in Utah later this month. This is the first time in school history that SDSU has won the PCC, and only the second time where they’ve had a realistic chance of winning it. What’s more is that they have a legitimate chance at winning the national title. Your No.2 nationally ranked Aztecs could potentially face No.1 UC Berkeley in what would be a California showdown.

Club sports are often neglected in the college sports world, but excellence should be recognized at any level. SDSU is the class of the PCC and is building a dynasty from the ground up. UC’s with varsity water polo programs have the luxury of receiving players on their club teams who were either burned out on the varsity scene or who just missed the cut. Historically, this has created a disparity in the club water polo domain, which is why seeing two CSU’s battle it out for gold is so rare. A new era has come for the Aztecs and has no signs of changing anytime soon.

More info regarding the national tournament to come.