In a highly anticipated defensive game, SDSU (4-2) were ready to face WVU (5-0) for the Continental Tire Las Vegas Invitational Championship. From the beginning, both teams came out pressuring the ball and it was clear that defense was the game plan for both teams. SDSU scored first to start the game off a free throw by Zylan Cheatham, the Aztecs shot surprisingly well from the free throw line. West Virginia made it obvious they would not give up anything easy and there full court pressure made it difficult for SDSU to control the ball. After 5 minutes of play SDSU had a 6-2 lead against WVU, that sparked a 15-0 run for the Mountaineers who would not give up the lead leading into half time 34-26. 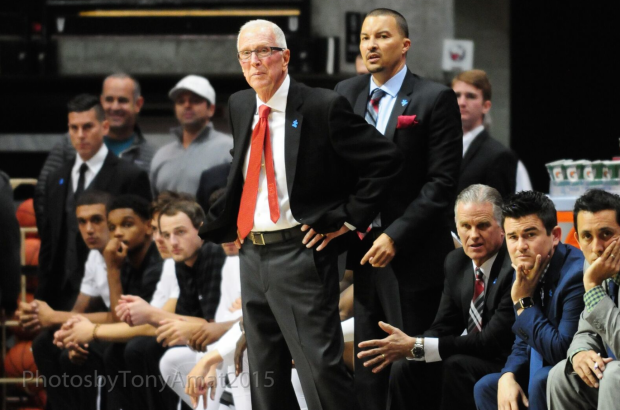 The Mountaineers were led by Daxter Miles Jr. who had 6 points 1 rebound and 2 assists, along with an emphatic dunk that had the bench and the crowd going. SDSU struggled to inbound the ball and turned the ball over the entire first half off, which converted into 18 points off turnovers for the Mountaineers. SDSU struggled offensively as well going 0/6 from the 3 point line and only shot 31% from the field. SDSU battled to keep the game close in the first half and that was mainly because of the production from freshman guard Jeremy Hemsley on the offensive side of the ball, who ended the half with 10 pts leading all scorers.

On the defensive side center Skylar Spencer tied a career high 6 blocks in the first half, after a career high 15 pts against number 14 ranked Cal in last nights game. SDSU started the second half the same way they started the first half, turning the ball over and struggling to inbound the ball. Although SDSU came out playing better defensively in the second half, they were unable to rebound which led to second chance points for WVU who jumped out to a 21 point lead with three minutes left.

The Mountaineers defense was suffocating SDSU the entire game and the Aztecs could not find a solution. After 0 points in the first half Devin Williams finished with 10 points and 9 rebounds and teammate Daxter Miles Jr. added 14 points and 3 rebounds as the Mountianeers of West Virginia dominated the Aztecs 72-50 to become the Continental Tire Las Vegas Invitational Champions.  Jeremy Hemsley finished 14 points and 4 rebounds. The Aztecs are now (4-3) and hope to Win against Long Beach State on December 1st.