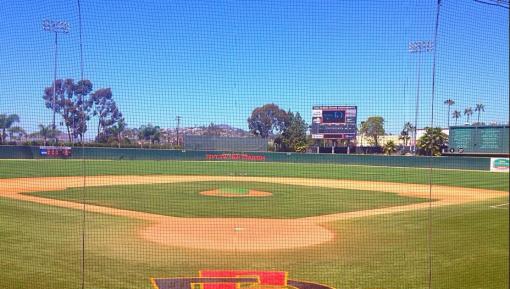 The Aztecs lost game one of the season 8-2 on Friday night in front of a large crowd on the Mesa. The game, however was much closer than the final score portrays. Marcus Reyes (Junior/Rancho Buena Vista HS San Diego) pitched well and kept the Aztecs in contention against the 14th ranked team in the nation. Reyes went seven innings giving up two runs on four hits while striking out five. He also allowed two runners to reach base via the walk.

Cole Irvin (redshirt Junior/Servite HS/Yorba Linda, CA) was solid through seven innings of his own for the University of Oregon. Irvin went seven innings allowing six hits with nine strikeouts and didn’t give up a run.

With the game tied two-all headed to the top of the ninth, Oregon loaded the bases and was able to get six runs to cross the plate to secure the opening night victory.

Game two on Saturday didn’t go much better for the Aztecs as they dropped the middle game 10-5.

Cody Thompson (RS Junior/Bishop Alemany HS/Granada Hills, CA) took the loss for the Aztecs as he struggled to get through three innings allowing five runs on just four hits and walking four.

Game three of the weekend series went better for the Aztecs. However Oregon still managed to edge SDSU 4-3.

Each team put four pitchers out on Sunday with Oregon finally breaking through in the top of the eighth inning of Aztec Senior Brian Heldman (Round Rock, TX) for two runs before getting the go ahead fourth run off Dominic Purpura (Junior/ Hinsdale, ILL). Stephen Nogosek (Junior/Roseville, CA) notched his first save of the season for the Ducks, shutting the Aztecs down for the final inning and two-thirds.