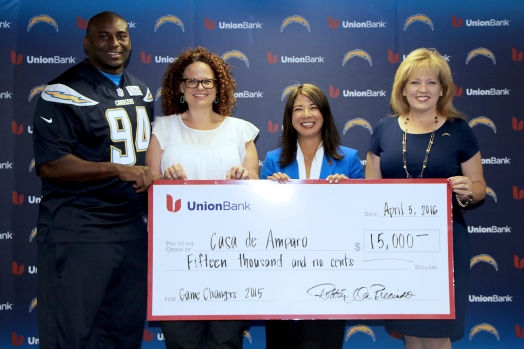 As part of its ongoing commitment to responsible banking and its continuous support of the San Diego community, Union Bank partnered with the San Diego Chargers for its annual fundraising program called Game Changers, which raised more than $15,000 for Casa de Amparo over the course of the Chargers’ 2015-2016 Season. The Game Changers program culminated April 5 with a donation presentation at Chargers Park where Chargers defensive end Corey Liuget and Director of Public Affairs & Corporate/Community Relations Kimberley Layton joined Union Bank Regional President Robbin Narike Preciado to present the donation to Casa de Amparo.

Union Bank has been a proud sponsor of the San Diego Chargers for more than 10 years, and during the last three years, the Game Changers program has raised more than $45,000 for local non-profits.

“This is what teamwork is about — working together with the San Diego Chargers and the Chargers’ generous fan base to help a great organization in our community,” said Preciado. “Union Bank is proud to support the Game Changers program and the important work of Casa de Amparo.”

Every dollar donated supports Casa de Amparo’s initiatives to prevent child abuse and mistreatment. Casa de Amparo serves more than 1,000 Casa Kids and young adults, from prenatal to 25 years old, as well as nearly 1,000 families, including more than 50 military families, annually, through six integrated programs that promote healing, growth, and healthy relationships. The donation will contribute to Casa’s initiatives to help put a stop to child mistreatment of any kind and end generational cycles of abuse.

The Game Changers fundraising program invited fans at Chargers home games to gather their loose change and dollar bills and donate at the Game Changers Mobile for a fun, interactive fundraising activity. As part of the program, attendees also had the chance to win a variety of prizes, such as rally towels and football gear signed by Chargers players, including Philip Rivers. Fans also had opportunities to win upgraded seats to watch the Chargers play.

Total donations were matched by Union Bank and the San Diego Chargers, up to $5,000 each.

For information about Game Changers, please visit http://www.unionbank.com/gamechangers or find us on Facebook at http://www.facebook.com/unionbank.

About Casa De Amparo
Established in 1978, Casa de Amparo (Home of Protection) is recognized as a leader in treating and preventing child abuse and neglect in San Diego County and beyond, with locations in Oceanside and San Marcos. The non–profit organization annually serves over 1,000 Casa Kids, from prenatal to 24 years old, as well as nearly 1,000 families and 450 adults, through six integrated programs that promote healing, growth, and healthy relationships. These programs include Residential Services, Counseling Services, Family Visitation, Hayward Child Development Center, New Directions, and Young Parent Network. Casa de Amparo is the San Diego Chargers Courage House, part of a national network of NFL teams and local charities dedicated to the prevention of child abuse.

About the San Diego Chargers
The San Diego Chargers originated as the Los Angeles Chargers of the American Football League in 1960. The team relocated to San Diego in 1961 and captured the American Football League championship in 1963. It finished first in five of the 10 AFL seasons. Since joining the National Football League when the two leagues merged in 1970, the Chargers have won 11 AFC West division titles, including five titles in the last 12 seasons (2004-15). The team finished 4-12 in 2015, only its second losing season in 12 years. Overall, the team has played in 28 playoff games. The Chargers were purchased by construction leader and real estate developer Alex G. Spanos in 1984 and has been under the guidance of Spanos’ eldest son Dean, the team’s current Chairman of the Board, since 1994. That same season the team won the AFC Championship and played in Super Bowl XXIX. All Chargers games are annually the highest-rated television programming in San Diego. The Chargers play their home games at Qualcomm Stadium and the Spanos family, nationally renowned as one of San Diego’s and the NFL’s most philanthropic families, is currently focused on bringing a new multi-use stadium/convention center facility to downtown San Diego.

About MUFG Union Bank, N.A.
MUFG Union Bank, N.A., is a full-service bank with offices across the United States. We provide a wide spectrum of corporate, commercial and retail banking and wealth management solutions to meet the needs of customers. We also offer an extensive portfolio of value-added solutions for customers, including investment banking, personal and corporate trust, global custody, transaction banking, capital markets, and other services. With assets of $115.4 billion, as of December 31, 2015, MUFG Union Bank has strong capital reserves, credit ratings and capital ratios relative to peer banks. MUFG Union Bank is a proud member of the Mitsubishi UFJ Financial Group (NYSE: MTU), one of the world’s largest financial organizations with total assets of approximately ¥295.8 trillion (JPY) or $2.5 trillion (USD)¹, as of December 31, 2015. The corporate headquarters (principal executive office) for MUFG Americas Holdings Corporation, which is the financial holding company and MUFG Union Bank, is in New York City. The main banking office of MUFG Union Bank is in San Francisco, California.