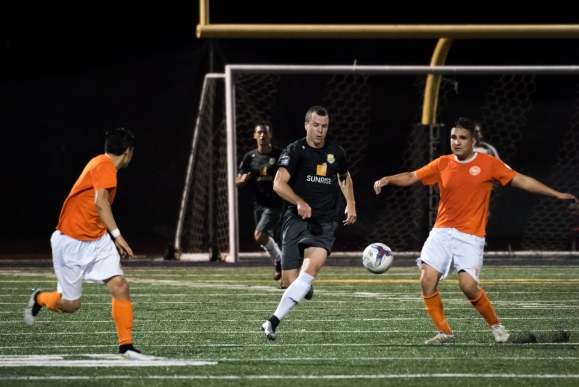 North County Battalion forward Eric Lopez has been selected as the second Mitre National Player of the Week for the 2016 NPSL season. The San Diego, CA native scored two goals in North County’s 4-2 win over FC Hasental on April 9th.  Those were his first points of the season. “I’m very proud of Eric and his achievement,” Battalion head coach Ryan Guy commented. “His athleticism and commitment to achieving excellence are special qualities and it was fantastic to see those come together in such a confident and comprehensive performance. I know he and the team are looking forward to trying to consistently match that quality throughout the rest of the season.” Lopez is a 2010 graduate of Scripps Ranch High School in San Diego.

Born in 1991, he played with the San Diego Surf throughout high school. After graduation, he made the starting squad at Cal State San Marcos where he majored in business management. While at CSUSM, Lopez became the program’s all-time leading goal scorer and was captain for two years. As a freshman, he earned Second Team All-Association of Independent Institutions honors and started in 11 of 14 contests in which he appeared. Lopez would go on to score a total of 21 goals as a member of the Cougars.

Lopez graduated from college in 2014 and moved on to play with Temecula FC and the Southern California Seahorses. “It’s an honor to be named the Mitre National Player of the Week,” Lopez added. “I know there are a lot of great players out there that could have easily earned this award and I am very grateful I was able to be among them. It’s a privilege playing for NC Battalion and with all of my great teammates to whom I owe this award to more than myself. We are a new team to this league, but we are much more than that. The backing we as players have from the coaching staff, the owners, and most importantly our other peers is unbelievable and one of the main factors to our team’s successes on the field. I want to thank our owners, my coach, and most importantly my teammates for helping me achieve this great award.”

The Mitre National Player of the Week is announced every Friday during the regular season.  The winner of this national honor is determined by a vote of media members from across the country.

The NPSL is a national league that operates in the 4th Division of the U.S. Soccer pyramid. NPSL teams are eligible to participate in the U.S. Open Cup through their affiliation with the U.S. Soccer Federation (USSF) and the United States Adult Soccer Association (USASA).  The NPSL remains one of the largest national leagues in North America.