Playoff Gameday! Gulls play game one of their playoff series tonight at 5:30pm in Texas. The game can be viewed at Rockin’ Baja Lobster in Old Town, or EastBound Bar and Grill in Lakeside, or bought at home here: https://ahl.neulion.com/ahl/secure/registerform

Preview: Puck drop is set at 5:30pm for the Thursday bout. The AHL affiliate of the Anaheim Ducks moved to San Diego last February there inaugural season has been nothing short of amazing and successful! However, the one area of concern is the mismatch the Gulls have with the Texas Stars, the opponent they are set to face in the five game series.

The Gulls faced the Texas Stars (The Dallas Stars affiliate) six times this regular season, with the only win coming on the road marginally: a 3-2 victory. The Gulls are a better balanced team, that is for sure, but the Stars are one of the league’s best offensive teams, stacked with such offensive fire-power, they often score a plurality of goals, with the most being eight this season. The key to the game is simple: shut down the offensive firepower that is the Texas Stars; easier said than done when Gulls Defenseman Shea Theodore is up with the Anaheim Ducks filling in for an injury. Coach Eakins has done a phenomenal job at adjusting the game strategy, or so it seems, as the Gulls have somehow found a way to outshoot the Stars in the last 4 matchups. However, goaltenders didn’t have the best of nights, our lines were meddled with due to Anaheim’s injury issues, and the chemistry along the lines was changing with trades. The goaltender matchup for tonight  will likely be Anton Khudobin (19-8-1-0) vs. Maxime Legace (19-10-0-1). The goaltending matchup may seem even, but at the end of the day, it all depends on which team shows up: will the Gulls be able to slow down the flurry of shots once again, or will the constantly shooting Stars get through the defense of the Gulls, who are again missing one of its best members in Shea Theodore?

In my opinion: the key to this series will be the Gulls sticking to their modified game plan; credit has to go to Coach Eakins for figuring a way to slow down the ever-scoring Texas team (shown in SOG leader in chart). The Stars have been able to sneak quite a few past our goaltenders this season, so solid performances by Khudobin or Hackett are what to watch for, as well as the youthful defensive line making it as easy as possible for the goalies to perform well. Texas will have their fair share of chances, we just cannot allow breakaways to this team. In 5 of the 6 games, we got behind early, the Stars took advantage, 5 goals were scored by Texas in 5 of the 6 games, that figure alone will not help you win any games.

Gulls fans are certainly ready for this series; a crowd of 35+ went to the arena at 4am as the team left Tuesday to show them support. Come on out to the watch parties tonight or on Saturday at 5pm (plan is to pack Rockin’ Baja). Gulls hockey is the place to be, the cheapest ticket in town, and a very high level of hockey at that! Guaranteed home game next Thursday for game three, possibly more there after! Tickets available here:  http://www.axs.com/artists/1101354/san-diego-gulls-tickets and there is plenty available for the home Thursday game! 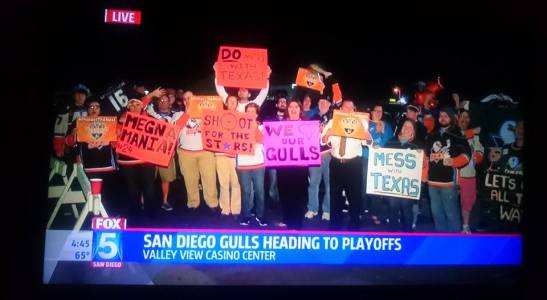