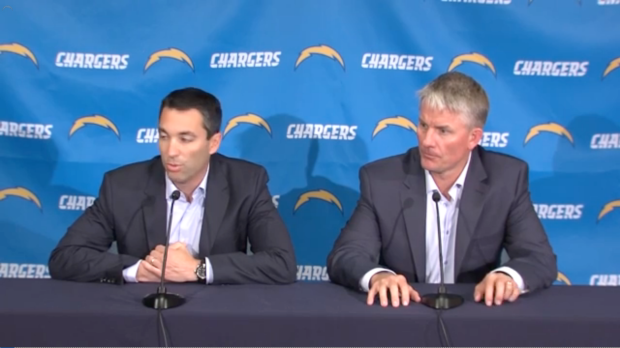 How is (Max) Tuerk’s knee and do you project him as competing for the starting job?
TT: “The knee is coming along well. He’s still rehabbing obviously but our doctors feel really good about where it is right now and feel great about the long-term prognosis, but he still has some rehab to do. Once we get him here and get our hands on him every day, we’ll have a better determination of what his start date will be. When he’s ready to go, yes, he’ll certainly be competing for that spot.”

What did you like about him (Tuerk)?
TT: “The two things that stand out with him, well three really: his length, his football intelligence, and his smarts. He’s a two-year captain at USC. He roomed with (quarterback) Cody Kessler. He loves the game of football. He prepares well. He’s just a very smart football player and his athletic ability on his feet. He can pull; he can reach people with his quickness, and he can get out to the second level really, really well. You haven’t seen very many centers like him recently that can really move like he does. He can leverage on people. You know, for a taller center, he can get his pads down and he can play with some strength, too. He’s a really productive player at USC and with great intangible which you need at the center position. “

In terms of Chris Watt, is it his job to lose or is it an open competition? How do you approach that?
MM: “We’re going to compete at every position. That’s the best thing about it and that’s one big reason we brought him in here is to come and compete for the job.”

How important is that versatility, especially given the change-ups that you’ve had to do in the offensive line in the last few years?
TT: “Well it’s nice. He’s smart and he’s athletic so he’s able to do that. We see him at center but certainly he’s played guard and he’s played tackle so that’s always nice on game day, as we saw last year. He’ll be able to step into a couple of different spots but I think as a rookie and as a young guy, we’ll probably keep him at one spot for right now. Actually, I should probably let Mike answer that question.’

Hunter Henry at the top of the second round. I imagine this was the guy you went into the day saying we want him.
TT: “For us, he’s a first-round talent. He comes from a pro-style offense at Arkansas so he played on the line of scrimmage, he’s asked to block and he does it pretty well. He’s very athletic with his feet and he’s competitive and tough. He’ll continue to grow and get stronger. His game is the passing game and getting down field. He runs well. Just excellent body control and eye-hand coordination. Great hands, knock on wood, he didn’t drop a ball his senior year and they used him a lot. There were a lot of targets sent his way. He was their go-to guy on third down. Teams in the SEC knew he was a go-to guy and he still separated and got open. He plays a really well-rounded game, very polished tight end. Again, that is hard to find at the college level since there aren’t that many tight ends. He’s very polished, especially for a younger player. He’s a true junior. He has a chance to come in here and learn from one of the best. We’ll see how far it can take him.”

Hunter obviously benefits from sharing a position group with Antonio Gates, but does Antonio benefit from young guy like him that can block and helps free up Antonio for your guys’ usage of him? I don’t know if it’s just limiting him to run personnel or certain situations where he doesn’t have to be on the field 75-80% of the snaps?

MM: “We’re going to, as you’ve seen in the past couple of years, we’re going to rotate a number of guys through. Antonio is very competitive, as you saw when he came back last year after an injury. He wants to be out there. This is a great guy to complement him.”

The talent that you’ve added here, how does it line up with the needs you have and what you’ve wanted to accomplish?
TT: “Well, the tight end one worked out very well. For us, he was the best tight end in the draft, so that was key for us in a position that we know we needed to add somebody, there’s no doubt. To have somebody on the other side of Antonio is important. We need some offensive line help and Max is a player that, if he didn’t hurt his knee this year, he would have been long gone before we picked. We’re lucky to have those two players.”

What excites you most about these two players when you’re thinking about coaching them, dealing with them in the day-to-day, what was it that you noticed about them that’s something unique that they can bring here to the Chargers?
MM: “We go back to the love of the game these players have. Whether it’s Jeff Davidson going up and working out Max and talking to him or it was Hunter at the combine when we sat down with him and just talked about how they played the game, what it means to them, how it could help us and really they’re passion and love for the game.”

How does what happened today set you up for day three? You filled two pretty important needs.
TT: “On the third day, the board really starts to scramble around a little bit as players come from all over. Everyone’s boards get a lot different when you get to the fourth through seventh rounds. We’ll see how it stacks up and just try to add the best players we can really regardless of position at this point. We’re just trying to find the best football players we can. I can’t wait for tomorrow. Tomorrow is the fun day. It goes fast, you know, picks come up quickly and this is where you make your money is scouting out the starters on that board. There are starters on that board tomorrow and we have to find them, and that’s the fun part. We’ve got an extra pick tomorrow. There are some guys out there we like; hopefully they’ll still be there.”

How do you feel about how things went the first two days?
MM: “We’re excited. I think it’s been exactly how we wanted it to go, to be honest with you. When we looked at things, and like Kevin asked earlier about going after Hunter early and then we wanted to get Max later on and we did. So it’s been perfect so far.”

So much of Philip Rivers and how he works with centers and really more of the protection that he needs, what do you see from Max from an intellectual stand point, trying to play all those positions? How is he wired to handle the center position?
TT: “That’s a prerequisite for us and he’s wired just like that. If someone can’t keep up with Philip, then he’s not going to last very long.”

How do you figure that out when you’re talking to the guy?
TT: “It’s between the scouting process and Coach Davidson, who met with him more than a couple of times. You just have to work it out that way. We feel really good about that.”