Matt Kemp is on pace to play in 150 games in 2016. Through the first twenty-six games he’s played in, he’s hitting .301/.318/.612. Do those splits remind you of anything? No? Yeah, as a casual Padres fan, you may not look deep into numbers of players who are not on your home team. But do yourself a favor and look up Matt’s numbers from 2011 when he finished second in MVP voting behind convicted cheat, Ryan Bruan. 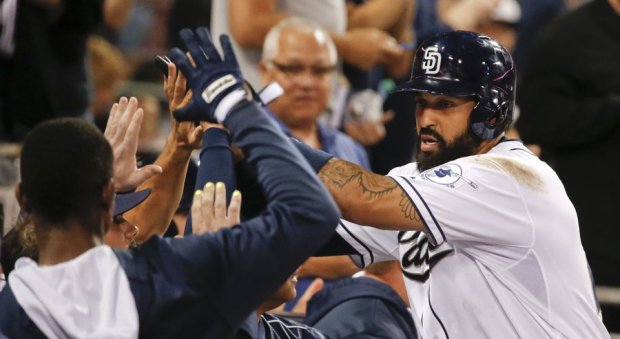 Kemp hasn’t had a first half like this in a couple of years. He’s had health concerns, but those even seem to have waned over the last few years as he’s managed to stay healthy and play in 304 games in 2014 and 2015.

His defense has remained less than spectacular, but he appears to be doing better in right field with manager Andy Green’s phenomenal use of defensive alignments.

Is it too early to call a guy like Kemp a candidate for MVP? Maybe. But every year from spring training guys like Mike Trout and Bryce Harper are called MVP candidates.

He sure looks like an MVP candidate to me. But what do I know?

As fans, we can help by voting Matt Kemp and the rest of our Padres into the home town All-Star game! Vote here.