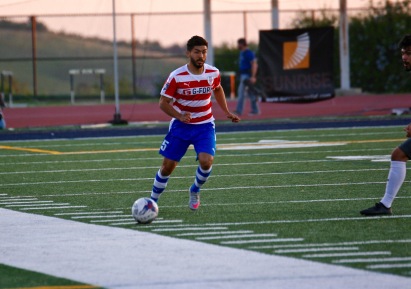 For Jose Merlo, the soccer field is a place he fondly calls home. “I’ve been playing soccer since I was about three of four years old,” says Jose, a recent University of San Diego defender, and current Albion SC Pros player.

Growing up in Escondido with his mother, father, and two younger sisters, Jose’s own passion for the game stems from his father, Tony, who played semi-professionally while Jose was a young boy. “He bought me my first soccer ball. I loved growing up watching him play,” says Jose. When he reached about 12 years of age, Jose joined the Albion youth league where he continued to play and develop his soccer skills. Although he tried out various positions while growing up, defense came to be his favorite spot. When discussing his position, Jose states, “I like possessing the ball on defense and countering. Having that role of a third person where people don’t expect you to come out and go forward is exciting for me.” Merlo continued his soccer career at San Pasqual High School where he was the team MVP in 2011 and 2012, and was also the league’s player of the year.

While many athletic careers end at the high school level, Jose’s was only getting started. After being recruited by a number of colleges, he eventually chose Seattle University which he attended for two years. Merlo enjoyed the school, however he wished to continue his soccer experience closer to home, and transferred his junior year to play at the University of San Diego.

For USD, Merlo was a consistent defensive right back for the team. As graduation began to draw near Jose realized he didn’t want his soccer career to end. A call from a former coach asking if he was interested in playing for San Diego’s own Albion SC Pros led to a perfect match for Jose to prolong his soccer career. Jose joined the team in February, and has been playing there ever since. “It’s a competitive and fun atmosphere,” Jose says when asked about Albion SC Pros, “there is a good mix of experience and great camaraderie, the older guys show the younger players the ropes and I really appreciate it.”

Outside of soccer, Merlo enjoys crossfit, which helps to keep him active and in shape all year long. He also likes to spend time with his family, especially his mom. “My mom’s the person who has made everything possible for me. I am beyond grateful.”  Although he isn’t quite sure where his soccer career will take him in life, Jose is not too worried about the future. His graduation from USD in May and career with Albion SC Pros are both positives in his life that he is very proud of. As for his next move, Jose says, “I am just taking it one step at a time, day by day. It’s been fun seeing that we have the ability to play against competitive leagues, and I’m excited to see how it all plays out. ”

Come watch Jose Merlo and the Albion SC Pros as they take on Frontera United May 14th at Mission Bay Stadium.

Olivia is a junior softball player at the University of San Diego studying English and Marketing. She loves reading, playing (or watching) sports, baking, and spending time at the beach.