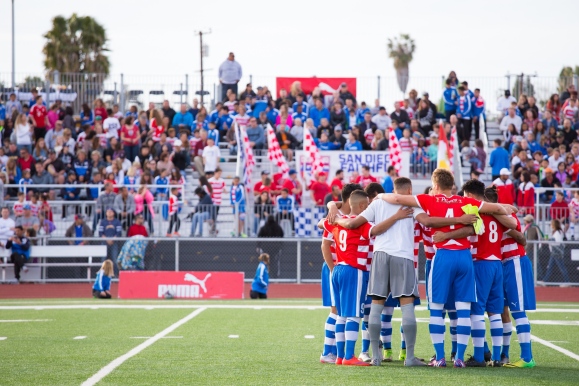 Although they’re mostly known for their spirit and chants, the Deep End Supporters isn’t just your typical supporters group. The group is all about charity and giving back, and is hoping to impact the soccer community in a major way.

“It’s not just about going to the games, we’re working on non-profit and charitable events as well,” says President Daryl Biggs. By giving back to younger underprivileged teams and other members of the soccer community, the group hopes to help the community strengthen and grow. One major project the group is focusing on is helping out Albion SC Pros’ fan and supporter, Evan Mundine. The 17-year old boy from Austin Texas is dealing with both Chrone’s disease and Ehlers-Danlos syndrome, and has had several surgeries as well as nights in the hospital. Evan recalls, “Soccer was something my mom introduced me to, and from the start, I felt at home with a ball at my feet. As I got sicker I found getting outside with my ball was the best pain relief.” Despite all of his troubles, Evan hasn’t let this effect his positivity and passion for soccer. As Daryl Biggs says, “He fights and fights and fights, and is eternally positive. We want him to know that he is not alone, and that there is an entire soccer community supporting him.”

Evan has a big online presence through his twitter, @bilzy, and has communicated directly with professional soccer players and teams. Albion Pros and San Diego Sockers Forward Matt Clare quickly became one of his favorite players, and he even texts him regularly. As Evan says, “When I heard about Albion and that Matt was joining, I knew I had a new team to support. And I love how the Deep End supports soccer in San Diego and how dedicated they are to growing the game.” The Deep End Supporters connected with Evan before the Albion SC Pros versus Battalion game, and they hope that they can give him the fun-filled soccer experience that he deserves in the near future.

The Deep End Supporters are planning to have a large soccer charity event in August or September. Several teams around the San Diego area will be invited to participate and help raise money. “Bringing awareness to rare diseases and the full effect they have on families and being able to play with my heroes,” Evan says as he discusses his main goals for the event. “To get a final game and to play with the players that inspired my dream to go pro is really exciting,” he continues. The Deep End is also attempting to get the American Outlaws as well as the MLS involved. College teams and professionals will be welcome to play, and they hope to have some well-known players attend in order to attract a large crowd for a good cause.

The group hasn’t contacted specific charities yet, as the event is dependent upon Evan’s availability, but they are always open to support from any charity or group. Evan wants to connect with Make a Wish and the Leukemia and Lymphoma society. “Soccer has the power to bring people together, and we would love to combine our passion for the sport and helping others,” says Biggs. The group, overall, wants to strengthen the soccer community in San Diego, and knows that giving back to those less fortunate is a great way to do just that.

Olivia is a junior softball player at the University of San Diego studying English and Marketing. She loves reading, playing (or watching) sports, baking, and spending time at the beach.