Albion SC Pros and FC Hasental took the pitch Saturday night in an epic clash between the old guard from Thousand Oaks (CA) and the new in San Diego (CA). The undefeated Albion SC Pros looked to advance to 7­-0-3 on the season as they had already defeated FC Hasental on the road in April by a score of 3 to 1. This was also the final home game of the NPSL regular season for Albion Pros. They threw one heck of a  fan appreciation party that included free food and live music from local reggae band raggabond.

Albion Pros players thanked their fans on Fan Appreciation Day by throwing Albion gear into the stands to start the game. Albion Pros got off to a sluggish start as they trailed early on in the game. Cameron Artigliere of FC Hasental scored the first goal of the game in the 14th minute.  Shortly after the FC Hasental goal they would go down to 10 men in the 23rd minute thanks to a red card by Joel Contreras for fouling Tre Hayes of Albion Pros in the box. It was decided that Felipe Liborio who made last weeks game winning PK goal in the 80th minute against SoCal SC would have the honors. This time Liborio would miss the kick wide left.

Sixteen minutes later, FC Hasental’s Cameron Artigliere would strike yet again. Artigliere fired a rocket on a free kick from 30 yards out to give FC Hasental a 2-0 lead over the Albion SC Pros in the 39th minute. This was an uncharacteristic start for the best goal keeper in the NPSL in Albion SC Pros goalkeeper Jean Antoine. Antoine  had only allowed two goals in eight league games (720 minutes). So far Jean Antoine had allowed two goals in just 39 minutes.

Thankfully Albion Pros would get one goal back before the half in stoppage time thanks to a rocket off the foot of David Luquen. Luquen scored on a designed corner launching the ball past FC Hasenstal GK Chase McQueen the grandson of Steve McQueen the famous American actor from the 1960-70s. Thus scoring the first goal against McQueen who was making his NPSL debut. Albion Pros would head into the half trailing FC Hasental 2-1.

During the 49th minute of last night’s contest The Deep End (Albion SC Pros) fan group broke out into song. They invited the fans to sing along with them as they sung “You Are My Sunshine” to honor the victims of the Orlando Shootings.

Three minutes later David Luquen would score his second goal of the game on a beautiful cross by Felipe Liborio. 52 minutes into the game the scoreboard would read Albion SC Pros 2 and FC Hasental 2. David Luquen and company would run to the stand in celebration of the game tying goal. I like to call this moment the San Diego Leap as it looked like the Lambo Leap. This celebration by the Albion Pros sparked the home crowd into high gear.

In the 62nd minute of the game FC Hasental would regain the lead on a goal by Jonathan Martinez. Antoine came out of the box running towards Martinez attempting to make the save. The ball rolled by the diving Antoine thus giving Martinez an open net and an easy goal. Hasental had a 3-2 lead over the undefeated Albion Pros with 28 minutes remaining in the game.

Albion Pros would not go down without a fight. Albion Pros letting off a barrage of shots from about 20 to 30 yards out just missing the goal. The momentum of the game shifted in favor of FC Hasental to Albion Pros in the 82nd minute due to a significant injury to a Hasental player. Play was stopped for about six minutes as the injured player was evaluated by medical staff and was helped off the pitch. Hasental already playing down a man thanks to the early red card was now down to 9 players. Hasental had depleted their bench having used all subs. This would be the end of the Hasental attack as they would be playing on their heels for the remainder of the game.

FC Hasental would play the last eight minutes of the game attempting to protect their one goal lead. Albion Pros kicked it into high gear for the final eight minutes of the game with a two player advantage. In the 88th minute Albion scored the equalizer on a beautiful header by Trey Heyes assisted by Luan Oliveira. Six minutes of stoppage time would be added to the game due to the injury to the Hasental player in the 82nd minute. Albion Pros continued to attack the Hasental goal with no success. As the final whistle blew the scoreboard read Albion SC Pros 3 and FC Hasental 3.

After the game we spoke with Albion SC Pros Head Coach Ziggy Korytoski to get his thoughts on how his team played.

“We got punished for a number of mistakes tonight. Whether it was deserving or not we will take the point. It’s disappointing not to get full points. We don’t feel that we played up to our ability. At the end of the day we are still at a great place in the league.” 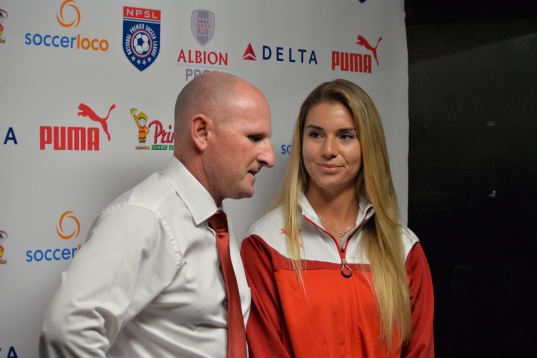 David Luquen of Albion Pros was named the MOTM (Man of The Match) for his two goals. 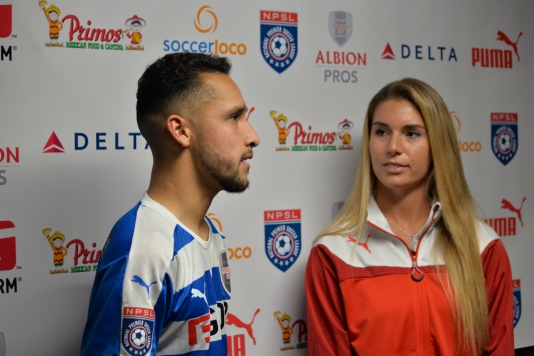 This weekend Albion SC Pros looks to remain undefeated and lock up home field advantage in the playoffs on the road at Temecula FC. Four of the six Albion SC Pros victories have come on the road. Albion SC Pros will return home for an exhibition game against Club Tijuana Xolos Under 20 team on Tuesday June 28th at 7:00 PM.

To view more photos from the game please head over to the San Diego Sports Domination page and click on Albion SC Pros vs FC Hasental. We have 24 photos for you to view in this slide show. We have about 100 + photos in the Facebook Photo Album.

The following photos are by Amanda SanMartin