Many of the great boxers we know of today like Muhammad Ali, Oscar De La Hoya, Evander Holyfield and Sugar Ray Leonard got their start in Olympic (amateur) boxing. They used their Olympic success as a platform for launching their professional boxing careers and went on to become household names that shaped the boxing industry. Despite the popularity of both Olympic boxing and professional boxing, most boxing fans today don’t know that there are huge differences between the two.

The boxing rules, the length of the bouts, the boxers themselves, the boxing rings, skill level and the general atmosphere surrounding amateur and professional boxing are relatively different. Here are the main differences between the two sports.

In Olympic boxing, there is a specific set of rules geared towards the health and safety of competing boxers. These rules are uniform in all 190 countries affiliated with the Amateur International Boxing Association (AIBA) and are simply a safety standard that governs the sport.

For professional boxing, rules vary from one country to another, sometimes even within one country. Boxing promoters and boxers alike in the professional sport may also have their way when it comes to deciding on the specific rules that suit their fight.

In Olympic boxing, there are three maximum rounds, each lasting three minutes for male boxers and four, two-minute rounds for female boxers. Time allocated for each round may vary depending on the level of amateur boxing.

In professional boxing, fights are from four rounds up to 12 rounds, with a standard of three minutes each. In some cases, exhibition matches can even last less than four rounds.

This is one area where there are glaring differences in the way boxers show up for a fight. In amateur or Olympic boxing, boxers have to wear headgear to prevent trauma to their eyes, ears and head, which are the most common areas of injury in pro boxing. While headgear will not completely prevent an amateur from injuries, they do prevent most serious injuries from happening. Gloves and mouth guards are worn in both sports.

Scoring of the Fight

Although the concept of landing hits and avoiding hits is the same for both Olympic and professional boxing, the truth is, the two types of boxing are scored in very different ways.

Five judges score the bouts using the help of an electronic counter to count the most legal punches. In this type of boxing, an amateur can lose the majority of the rounds, but if he dominates one round by landing more legal punches, he can still win. Olympic boxing has very stringent rules for what constitutes an acceptable or legal hit.

To score points, the knuckle part of a closed glove worn by an amateur must land either on the front or side of the body or head but always above the belt. There are no additional points for aggression, knockouts or getting your opponent to wobble or stagger. If you can land cleaner hits, and land more of them on your opponent, the better.

Three judges use a ten-point system to determine the winner of each boxing round clearly. The fighter who gunners most of the points at the end of the bout is declared the winner. Just like in amateur boxing, hits must land on the front or side and above the opponent’s belt. Pro fighters don’t land points by just landing hits. They’re scored using set criteria based on the judge’s own opinions of the fight. They include: 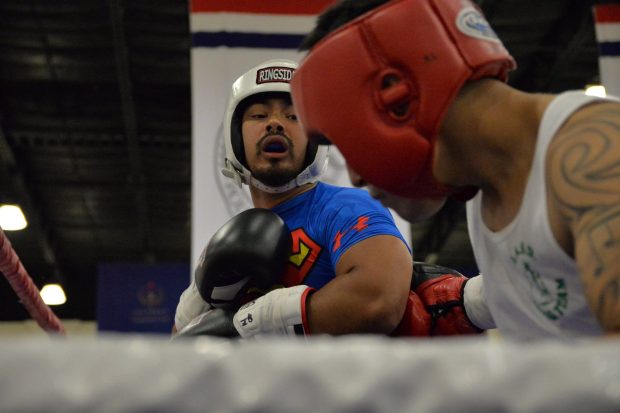 Like most professional sports, the money factor is in most cases the key differentiator with respect to the boxing skill levels of amateurs and professionals. Athletes who are paid to compete, regardless of the sport, are usually more highly skilled and more experienced than those who don’t. Boxing is no different.

In Olympic boxing, ring sizes are usually standardized with a minimum of 16 feet square and a maximum of 20 feet square. On the other hand, professional boxing fights have no standard size for rings. That means fighters could be fighting in a small ring or a huge one. While most professional rings are usually around the same size as Olympic ones, they don’t have to be.

Considering that Olympic boxing bouts consist of only three rounds, expect them to be fought at a much faster pace than in the professional ranks. For professional fighters, they have to control their pace to go 4, 6, 8, 10 or 12 rounds.

In amateur boxing, this count is given to boxers in difficulty, especially after receiving heavy blows so as to recover. The bout is usually stopped after 3 eight-counts a round or 4 in total. In professional boxing, this rule doesn’t exist.

Olympic boxing referees tend to be more protective over boxers. Their priority is to protect the boxers in the ring while also enforcing the fighting rules. In pro boxing, referees work with the prevailing rules in the fight, and in some cases may keep score.

Whether you’re an amateur or professional boxer, training with the best coaches is highly recommended. Find a reputable athletic performance facility with state-of-the-art training equipment for your boxing needs. Personalized one-on-one or group training sessions for all types of boxers in a motivational environment can help you keep track of your goals and achieve your personal milestones.

Jenna Thompson is a freelance writer and a licensed fitness and boxing trainer from Santa Monica, California. She currently works with one of the premier boxing training facilities in the city and takes great pride in helping boxers perfect their skills and go on to become Olympic and pro boxers.