San Diegans are still reeling from the loss of the Chargers more than a month ago. This past weekend the San Diego Padres held an event to celebrate the great sports history of our amazing city. That got me to thinking. Who are the top athletes in San Diego history? The top names that easily come to mind are Tony Gwynn (Padres), Trevor Hoffman (Padres), Junior Seau (Chargers), Phil Mickleson (PGA), Billy Casper (PGA) etc. But only four names fit on the Mount Rushmore of San Diego Sports. Our four would be Tony Gwynn, Ted Williams, Junior Seau and Jimmie Johnson.

Jimmie Johnson has a very impressive resume that puts him in our top four best athletes in the history of San Diego. Before we talk about his upcoming race let’s take a look at his resume. Johnson is a seven-time champion of the Monster Energy NASCAR Cup Series driving for Hendrick Motorsports. Johnson was named Driver of the Year five times (2006, 2007, 2009, 2010, 2013) most times in the awards history. First racing driver to win the Associated Press Male Athlete of the Year Award (1999) in the United States. Johnson is currently the winningest active driver in NASCAR with 80 career points-paying victories. Johnson is currently sixth place among the all-time NASCAR Cup Series winners. Johnson is the all-time winningest Cup Series driver at the following tracks: Auto Club Speedway, Charlotte Motor Speedway, Dover International Speedway, Kansas Speedway, Las Vegas Motor Speedway and Texas Motor Speedway. Johnson is also the only driver to have qualified for the NASCAR Cup Series Chase for the Championship every single year since its inception in 2004. As you can see Jimmie Johnson is racing royalty and that makes him one of the finest athletes to have ever come out of San Diego.

On February, 26 at 11am PT (2pm ET) Johnson will attempt to win his third Daytona 500 (8 top 10 finishes). Only five drivers (Richard Petty, Cale Yarborough, Bobby Allison, Dale Jarrett, Jeff Gordon) have ever won the Daytona 500 three times. According to Nascar, “the 2016 DAYTONA 500 was sold out and produced the closest finish in the event’s history. In 2016, the track completed a $400 million renovation known as “Daytona Rising.” Also NASCAR recently introduced a new race format that has been implemented and will be used at the 2017 DAYTONA 500. Hendrick Motorsports was kind enough to set up an interview between San Diego Sports Domination and Jimmie Johnson. You will be able to watch the 2017 Daytona 500 live on Fox!

San Diego Sports Domination: What was your first car and what got you into racing?

Jimmie Johnson: My first car was a 1986 ford ranger pick up truck and my grandfather owned a motorcycle shop in El Cajon. I grew up around the local tracks and got my entry point there.

San Diego Sports Domination: What is it like having a member of NASCAR’s Mt Rushmore as a boss in Jeff Gordon?

Jimmie Johnson: Jeff Gordon has been incredible. We formed a friendship really before our working relationship and he has been there for me on many levels. When I stop to think about this spot in the sport your right Gordon is on the Mt. Rushmore and I am just thankful to have him as a friend, teammate, and a mentor.

San Diego Sports Domination: Who would you put on NASCAR’s Mt Rushmore?

Jimmie Johnson: I would need a much bigger mountain. The neat thing about each sport especially NASCAR it’s length of time being here and how many people it has taken to really get to where it is. I was sitting at the Hall of Fame watching Mr. Hendrick get inducted the other day and it has taken so many people along the way that have played their part in helping this sport grow. It is impossible to pick just three or four. Bill France, Sr. and Bill France, Jr. have all had their places. There are different team owners, drivers, sponsors throughout key points in time. It’s really tough to answer that question.

San Diego Sports Domination: Who is the MVP of your pit crew and why?

Jimmie Johnson: In the end the one that has the most vested would be Chad Knaus. With how many strings he has to pull in a week a day or a race. All of the things that he has to think about in order to make the right decision puts him as my MVP.

San Diego Sports Domination: If you could time travel and compete against any other driver in their prime, who would you race and why?

Jimmie Johnson: Dale Earnhardt. I was months away from competing against him. The other greats that I idolize and looked up to I would have loved to race against. But that was never an option. I was never going to race against Richard Petty as my entry into the sport was so far past his departure from the sport there was just not way. But I was literally a few months away from having a start against Dale Earnhardt. So that would be the one I would go back to. 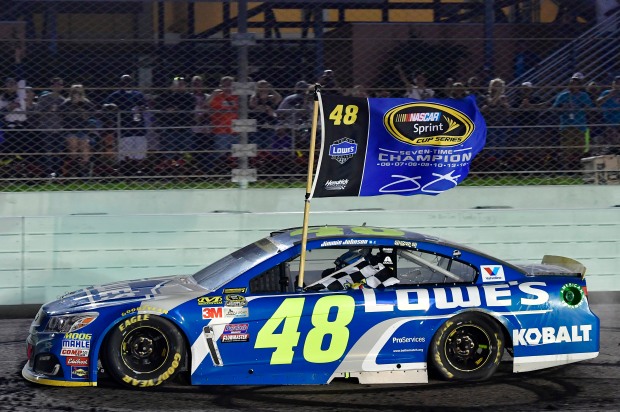 San Diego Sports Domination: You drive under the #48. Does #48 have any significance to you or was it assigned to you?

Jimmie Johnson: We were very fortunate to pick our car number because it was a new team starting out. I lobbied hard for the #48 straight out of the gate largely because the numbers 4 and 8 have played a large part in my life. With Jeff Gordon owning part of the team and having driven the 24 car it was a numbers play on 48. I pushed very hard for the #48 and we got it done.

San Diego Sports Domination: You have won the Daytona 500 (TWICE) what have you learned through the years in this race that makes you so successful?

Jimmie Johnson: Really it’s all about controlling emotion. We start our season off the the super bowl of the sport. It is so easy to make a mistake early in the race that affects you. It’s a long season with long races. Being able to walk the tightrope at 100% and not step over it is so difficult but it is part of our job. It is easy to overstep that 100% mark Daytona since we have all been on the couch for the last three months. Walking that tightrope is really hard to do with all of that adrenaline and emotion.

San Diego Sports Domination: What goes through your mind when you go into the first turn at Daytona?

Jimmie Johnson: Excitement. You know we have had time off and the build up of the week. We are down there for two weeks getting ready and then it’s finally race time. It’s such a spectacle and you can literally see the fans in the stands moving getting to their feet. The light bulbs on cameras flashing. It is just a really cool moment.

San Diego Sports Domination: What goes through your mind when you are spinning around after someone has spun you out?

Jimmie Johnson: Through experience of crashing you know the tap or bump that started the spin. You have a good idea of what is coming next. Sometimes you are under the impression that you can save it and other times you know that you are in big trouble. It is amazing how quickly you can sense and know that you are going for a fun ride or you better hold on tight you’re going for a not so fun ride.

San Diego Sports Domination: What is it like crossing the checkered flag as the leader?

Jimmie Johnson: The way the race unfolds if you have been the dominate car there is a sense of relief that you didn’t mess up the race and you got the job done. If it’s a late race pass especially at Daytona you are in a neck and neck race for the finish line. To have the race come down to those final few seconds sends you over the top with emotion.

San Diego Sports Domination: What are your thoughts on the new point system that NASCAR unveiled yesterday?

Jimmie Johnson: I am excited. Largely because I know the backstory. The time and thought that was put into this new system from all of the key stakeholders in this sport. To my knowledge this is the first time that all of the powers from the different departments (TV, owners, drivers, NASCAR) to sit in a room and look at what will really help grow the sport from everyone’s opinion. We have had a lot of change and you can argue that point but when you really think about what went into this format change… I am very excited and optimistic about how this is going to play out this year.

San Diego Sports Domination: How long are you thinking about driving for?

Jimmie Johnson: It is hard to put a number on it. I know that I have five more left in me. My age now is higher than what it used to be but my love for racing is more intense than ever before. I feel like I am doing my best work right now. I can race for my reasons at this point with the success that I have had. If i am ever concerned about injury or that this is not right for my family or if that fire ever goes out… I have the luxury to step down. I feel pretty liberated from that standpoint. I just love to race at this point and don’t see that ending anytime soon.

San Diego Sports Domination: In the future do you think you will be interested in starting your own team?

Jimmie Johnson: No. Home for me is Hendrick Motorsports. I will certainly have some type of involvement there. It is my home and I have no desire to start my own team.

San Diego Sports Domination: What do you plan to do after NASCAR?

Jimmie Johnson: I still have a ton of racing that I want to participate in. I would love to go back to my roots for starters. Do some off road truck racing again. Endurance sports car racing has always been very interesting to me. I love the idea of traveling the world racing exotic cars. If I can set that up it’s going to be a high priority.