It’s been a while.

You can’t make sense of anything about this season. On senior night, the Aztecs failed to pull away until late to an Air Force team that shot 3-20 in the first half. SDSU was merely seeking a split—yes, a split—with the Falcons. They got it. Matt Shrigley and Malik Pope scored in double figures to lead the way. The Aztecs shot 4-27 from deep, but held Air Force to 5 offensive boards and forced 15 turnovers while committing just 9 themselves.

The team has pivoted toward a more three point happy approach. Wednesday night was a worst case scenario, but two of those triples could not have come at a better time. Air Force cut back into the lead to start the second half. With 8:08 to play, Matt Shrigley hit a three from the top of the key to extend the lead to 9. Moments later, Shrigley hit another from the right corner to push the lead to 12.

And really, that’s about it.

Those who decided early on that San Diego State’s season would boil down to its performance in the Mountain West Conference weren’t wrong. But reason for hope to the contrary was simple: The favorite to win the conference would slowly get healthy again and flex its muscles as the season wore on.

And boy, there were some mixed signals. The Aztecs played Nevada off the floor just two and a half weeks ago to spark a three game win streak. A lethargic home loss to Fresno State followed. Then came a trip to Fort Collins where the Rams broke the Aztecs’ hearts again.

SDSU needs to win Saturday at New Mexico in the regular season finale to secure the #5 seed for the Mountain West Conference Tournament, which would give the team a first round bye. If you defined a rivalry by the animosity present in each arena when two teams play alone, you’d say the Lobos are the Aztecs biggest rival at the moment. New Mexico will be equally motivated to win Saturday at The Pit.

This is where I’d normally say Tim Williams has missed 7 straight games with a stress reaction in his foot. Good news, right? Sadly, his status probably will factor little into Saturday’s outcome. SDSU fumbled a large lead away at home to the Lobos earlier in the season, with Williams ranking pretty far down the list of reasons for the failure to protect that lead.

Just look at the MWC standings following Wednesday’s action. SDSU is 9-8; Nevada and Colorado State are at the top with 4 losses apiece. Injuries aside, the team has two red marks on its record: road losses at San Jose State and Air Force—two teams that a program this proud and dominant should never overlook. The two losses to Colorado State could easily have gone differently; 10 matches between the two teams may end in a 5-5 split. I mentioned the game given away to New Mexico. Then you have three games in which the Aztecs were legitimately out played for at least a decent portion of a half: at Nevada, at Boise, home for Fresno. 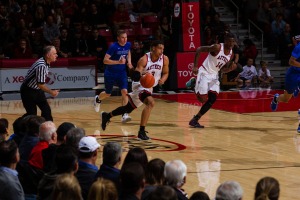 Does any San Diego State team of recent memory come out of that with more than 4 losses? (The answer is no.) That would put them into at least a tie for first. This season has been different for many reasons. Shall we?

"…and there are whispers about this team’s commitment to the defensive boards." Gonna keep that in mind. https://t.co/PM8rn5x3JS

Now would be a bad time to lose sight of one thing that has been steady, even with this year’s team: a commitment to the defensive side of the ball. Looking at this season as one body of work, the Aztecs once again are one of the nation’s best. Did this year bring another #1 ranking? No. But this season has been a perfect reminder that competitiveness often leads us to under-value the little things, the intangibles, the middle ground.

Saturday’s game is certainly a big one. Wednesday’s game did little to build the suspense. The state of the team is harsh—they aren’t playing any better. No upward trend. No weeks-long momentum to carry into March. There has been no steady build. Little at all in or around the team has been steady, save for the love that Steve Fisher has shown to his players.

“I like our team.” How many times has the hall of fame coach spoken that phrase in a news conference? Judge the man by his actions; you have no choice but to believe him.

Call it the season from hell. Other teams across the country are in similar spots. Health and luck are never predictable. Both have played a larger role than one would hope in this Aztec basketball season. We know this NCAA-or-bust labeled season would be a wild ride. Nobody thought it would be this wild.

Several wins across the schedule this season have been far from pleasing. But they are wins regardless. Early on, this season was pitched with one purpose above all others—make it back to the NCAA tournament. This team needs 3 (or 4) wins in a row to get there. How pretty they look won’t matter. Ahead of Saturday’s regular season finale, we’re faced with a few days to celebrate a few of those little things, like Shrigley’s second half triples or timely buckets from D’Erryl Williams.

Here’s to those seniors—Matt Shrigley, D’Erryl Williams, Dakarai Allen and Valentine Izundu. Here’s to Malik Pope, who we may or may not see on the Mesa next year. Here’s to the rest of the roster, including Devin Watson and Jalen McDaniels, who are reason enough to already be excited about next season. And here’s to Steve Fisher, a shoe in for the Mount Rushmore of San Diego sports. He likes his team.