I may be biased in my nomination for the Ken McKenzie Award (presented annually to the individual who accomplishes the most during the season in promoting his or her AHL team by marketing and public relations) by nominating Matt Savant of the San Diego Gulls but there is not a single organization in the AHL that stepped up their game like the San Diego Gulls have this season: all under his direction.

Savant inherited a sensational front office staff in August that was headed in their inaugural season by Ari Segal before his departure to the Arizona Coyotes where he became the team’s COO. Last season the Gulls put up unthinkable numbers and smashed revenue records, how on earth were the Gulls going to be able to break this feat was what everyone wondered. Needless to say, Segal was sensational and I don’t believe fans (including myself) could have imagined that someone could fill his shoes appropriately and steer the ship in the proper course. The question was not would there be a decline in attendance, rather it was how bad would it be? Everyone was sure it was going to happen, and yet the answer is that San Diego’s attendance numbers increased. The unthinkable happened, but for good reason… Matt Savant’s leadership.

Savant came from the Ducks to San Diego with 15+ years of marketing, advertising, and developing the ultimate fan experience which is something we wanted as fans. We felt shortchanged in the offseason largely because of the lack of leadership in the front office; season ticket holder “perks” were limited. Under Savant, change came quickly: the Gulls put themselves on the map in San Diego. The Gulls social media accounts content share seemingly has increased two-fold this season. What’s more is that in practically every part of town one could find a San Diego Gulls billboard or poster, a full page ad in the Union-Tribune, and perhaps most importantly a variety of radio advertisements and TV commercials spawned (including a spot directly after the Super Bowl in early February). A crowning achievement came on February 12th where the Gulls made not only their television debut, but also became the first team in California to have a televised game; never before had the excitement of an AHL game been shown on public television in the “Golden State.” The results were clear as the Gulls game was reportedly viewed more than a NHL game on NBCSN. Savant has the intention to bring more high quality streams this coming season via Fox 5 San Diego/Fox Sports which he has built a strong and growing partnership with.

I speak for most fans when I say what we are most thankful for is the amount of community activities the Gulls have managed to put together this season. The Gulls held several events around town this season at local schools, military bases, and grocery stores in an effort to give back and grow the sport of hockey in San Diego. In the mindset of a diehard fan the biggest improvement in my eyes came in the dispersal of “Away Game Watch Parties” and “Gulls in Flight” Podcast recordings organized by the office featuring trivia and prizes hosted by the former mascot of the year Gulliver and the lovely Gulls Girls. Perhaps taken for granted, the Gulls front office is one of the few organizations in the league and the only team in the division to organize watch parties on a regular basis.

As far as community marketing goes in bringing people in, Savant was able to leave his mark midway through the season where he undoubtably formulated a theory of understanding the San Diego market after his late arrival in August. The bystander effect was about to explode at VVCC. The boldest move came when the Gulls decided they wanted to be the game changer: they were the first team in San Diego to start an initiative for the people of San Diego that had lost a beloved team in the NFL’s San Diego Chargers via the dispersal of thousands of free tickets and T-Shirts. The “Join the Nest” campaign as it was coined was such a success that other organizations like the San Diego Padres followed. In another move as a publicity stunt, Savant and co. managed to get season ticket holder and Baltimore Orioles star Adam Jones in the penalty box to serve as an “off ice official” on January 20th, the seasons first sellout date which started a long line of 12,000+ crowds on Saturdays. Jones’ presence alone was popular among fans in town and also harnessed a certain degree of national media attention. In an effort to make games more accessible and family friendly the office institutionalized “family 4 packs” featuring various concessions and tickets. 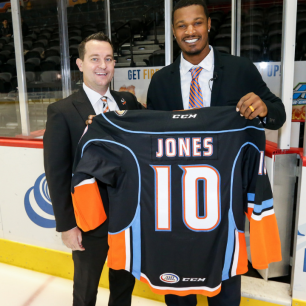 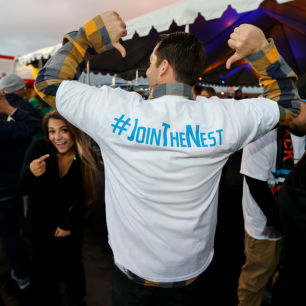 It’s at this point in the article that Ron Popeil would pop out of your screen and exclaim “but wait there’s more!” Perhaps seeing the lack of season ticket perks allocated to the people who matter most (that as aforementioned likely came with a absence of quality leadership in the offseason), Savant got with sponsors to bring promotional items to the fans, something that had ultimately not been seen in San Diego last season. The initial promo schedule included a rally towel and a magnet schedule, that was it. In January, the Gulls unveiled 4 new promotional items including trading cards, “Mighty Ducks” snapbacks, a Ducks/Gulls banner, and tonight for fan appreciation night a Gulliver bobblehead. The office has also recently announced that for the first round of the Calder Cup playoffs all fans will be gifted rally towels to support the team as the “Flight to the Cup” begins vs the Ontario Reign next Friday. To give back more to the special fans who are season ticket holders, the office put together a “Founders Day” event earlier this month which appears to now be implemented as an annual tradition where fans get to meet their favorite players as well as skate with the team and ask questions pertaining to the sport of hockey to players, coaches, and even Savant himself.

He knows the office and market he inherited was sensational and he will put his efforts aside as the humble person he is, but Savant has filled the desires of many hockey fans and we cannot wait to have him directing our operations for years to come. Perhaps he will be the voice to bring an All Star event to California, perhaps he and the Ducks will voice their opinions in the future for a new arena serving the community he calls home, but tonight is about the fans. With tonight’s game, the Gulls will pass last seasons attendance and have a chance to break the 300,000 fans mark. To do it, they’ll need 11,144 fans for a “meaningless game” in the 50 year old Valley View Casino Center, a feat they have accomplished on numerous Saturdays already this season. Of the teams that moved out to California last season, only one team’s attendance #’s did not decline. That team was the San Diego Gulls (per HockeyDB).