I have covered an innumerable amount of sporting events but one remains my favorite. I might be biased because I have an uncle who was in the 101st (Paratrooper and Green Beret) and a cousin who was 82nd Airborne. I have always loved and supported the US Military. I have family members who are Police Officers. I have Fraternity Brothers who have served/are serving in the US Military. I have friends who serve our nation in Law Enforcement.

October 7th, 2017, was the annual Military vs. Police Ice Hockey charity game in San Diego. The game played once per year features Patriots Hockey (Patriots) and The San Diego Law Enforcement Spartans (SDLE). This is the one game a year when the gloves come off and anything goes. The game known as “The Jeremy Henwood Classic” is played in honor of Jeremy Henwood a Marine, turned Police Officer who was killed in the line of duty. The game is played both on and off the ice. The cost of entry to the event is $10. Depending on which team you have come to support your money goes to that team’s charity, the Widows and Orphans fund for the Spartans and Fighting For Home Ice for the Patriots.

Before every game is the ceremonial puck drop. The Spartans select one person to represent the team as do the Patriots. For the first time since we have covered the Patriots Hockey program, the Patriots would honor one of their own, Mike Lans. Lans served in the United States Army for 6 years before being medically discharged. Lans survived three IED attacks during his deployments in Iraq,  a story that he shared with us after the game. Lans is currently a goalkeeper on the Patriots D5 team which plays at the San Diego Ice Arena. Mike was named the 2017 Patriot of the Year.

The plaque that was presented to Mike read:

“Mike, your involvement with the program is a shining example of what we look for in each of our rostered Patriots members. You have given your time, efforts, energy, and passion for your military family and have had a direct correlation on the impact the program has had in the community.

We take this time to recognize you as not only an outstanding community member but also as the Patriots Player of the Year. Congratulations Mike and thank you for all your involvements.”

The Spartans selected Chula Vista Police Officer David Sachs. Sachs was injured in the line of duty on September 19th, 2017, during a disturbance call.

Watch the  ceremonial puck drop below!

The Patriots and Spartans would play a rather boring 1st period to both teams standards, ended in a 0-0 tie. They would be back out on the ice quickly as they do not do the ice between the 1st & 2nd periods of charity games.

The 2nd period got off to a fast start for SDLE as they opened up the scoring, the goal coming against the Patriot back up goalkeeper. The starter Michael Goss was pulled to allow the back up to pick up some minutes. Shortly after the first goal SDLE would add a second. The back up goalkeeper was pulled and Goss returned to the game. Goss would finish the 2nd period without allowing another SDLE goal. The game became chippy to say the least during the 2nd period and that is what we have come to expect from this rivalry. We saw open ice hits like the one pictured below. 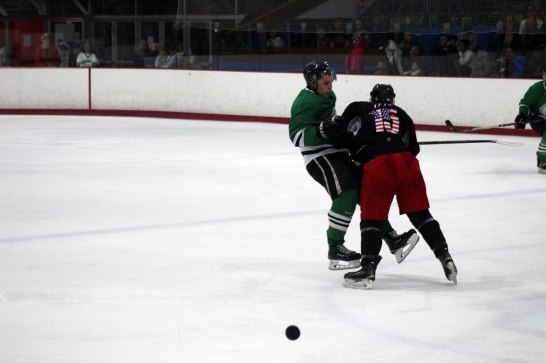 We saw some 5 minute majors. We saw some fights. We saw multiple Spartans/Patriots in the penalty box. We saw a very physical game of hockey out on the ice, a game that favors the Spartans. As intermission began the officials issued warnings to both teams. Stating that any open ice hit would end in a 5 minute major or ejection based on the hit.

I went inside the Patriots locker room during intermission to hear about how they planned to attack the Spartans during the third period. The goal was to limit penalty minutes. Stop trying to land the big hits and work on playing composed ice hockey. Every time they play the Spartans they are more focused on laying the big hits then they are on playing their game. That was something I could see easily. The Patriots had been practicing weekly and had looked good in practice. They just feel apart in the game. They fell of the game plan.

If you missed the game … we have created a highlight video for you to watch. Below the Video is the full game if you would like to watch that.