Following a 9-5 win in El Paso, the San Diego Sockers came into their home opener on November 5th looking to start their season 2-0. The team standing in their way was the Syracuse Silver Knights. Syracuse was coming off a 7-6 overtime win vs. Turlock. It was the battle of the 1-0’s in Valley View Casino Center. Let’s dig in and find out who won.

Syracuse wasted no time getting the scoring started, taking a 1-0 lead 39 seconds into the game. Sockers tied the game when Cesar Cerda scored off a deep assist from the Goal Keeper Chris Toth. Neither team could capitalize on great scoring opportunities including a play where Syracuse Goalie Andrew Coughlin made two remarkable saves in a span of 3 seconds, and a missed Sockers goal just off the Crossbar. The 1st quarter ended with a 1-1 tie. 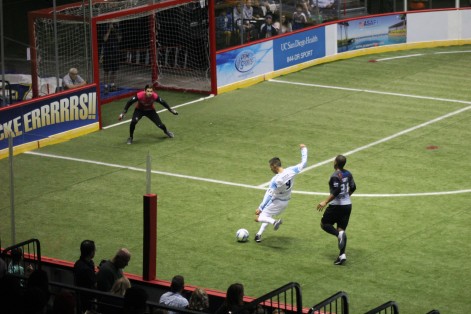 The second quarter produced more excitement. Former San Diego Socker Mike Perrera gave Syracuse a 1-2 lead with 12:44 left in the second quarter. Following the goal, Perrera ran into the stands and kissed his baby. Sockers tied the game on a power-play goal from Brandon Escoto with 10:03 left in the second quarter. The rest of the quarter was quiet as each team set up some scoring chances but just couldn’t capitalize. But the Sockers weren’t going into halftime quiet. With less than a minute left in the half, Kraig Chiles, off of a Matt Clare assist, gave the Sockers a 3-2 lead on San Diego’s second power-play goal of the game, their first lead of the night. Chiles shot was a beauty, coming from the left side of the goal against the wall, and hitting the ball into the top right corner. San Diego went into halftime up 3-2. 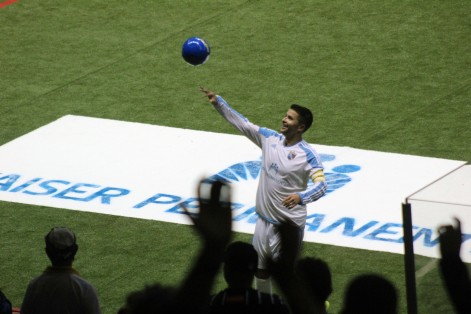 The 4th quarter was full of excitement. After a Sockers boarding penalty, Syracuse was on the power play and they would capitalize, tying the game 4-4 with 13:02 left in the game. Then the laughable happened. Are you ready? The Syracuse Silver Knights got an own goal as a Knights player hit the ball back to the goalie and it went into to give the Sockers the lead 5-4, 5:47 left in the match. The Syracuse own goal was awarded to the Sockers Brandon Escoto, his 2nd of the match. Syracuse brought on their sixth attacker with 3 minutes left in the game and tied the game 5-5 with 2:02 left in the game. With time running out and overtime looming, a Sockers player came to the rescue. With 41.7 seconds left in the game, Matt Clare scored the game-winning goal and celebrated with his shirt off and waving the shirt like a rally towel. Sockers win the game 6-5 and improve to 2-0 as Syracuse drops to 1-1.

The San Diego Sports Domination player of the game is Matt Clare who had 2 assists and the game-winning goal. The Sockers won their home opener in front of a crowd of 3,318. There are some new sites at the Sockers game, like a “Hooters Party on the Pitch” section where the 7th man used to sit. The San Diego Sockers Squad. The Sockers new hashtag is #WeAreCommitted, so if you want to tweet about the Sockers, use the hashtag and you might get a retweet. The Sockers next game will be at home vs Tacoma on Sunday, November 12th at 5:05 pm. It will be PJ/Onesie Night and the first 2,500 fans will receive a free cell phone credit card holder. Free parking is always courtesy of the San Diego Sockers.