The San Diego Sockers came into Sundays game looking to go 3-0. San Diego is coming off a thrilling 6-5 victory over the Syracuse Silver Knights 6-5 in their home opener. The Sockers opponent is the 1-1 Tacoma Stars who are coming off a 7-3 win over the Turlock Express. The Stars had former Sockers player Evan McNeley, and Danny Waltman, one of the best goalies in the MASL. Can the Sockers get the better of Waltman? Let’s find out in this west coast match-up.

The Tacoma Stars took the lead 83 seconds into the game with a Joey Gjertson goal, assist coming from Alex Megson. Sockers tied the game with 5:38 left in the 1st quarter on a Felipe Gonzales goal, assisted by John Sosa. Despite a few good goal scoring opportunities, the first quarter ended the same as their last game with a 1-1 tie. The Sockers took over the game in the 2nd quarter, holding Tacoma to zero goals in the quarter. The Sockers took their first lead of the game on a Kraig Chiles goal, assisted by Felipe Gonzalez. San Diego led 2-1 5:06 left in the 2nd quarter. With less than 10 seconds left in the half, the Socker drew free kick at the top of the circle. With 3.6 seconds left, Kraig Chiles took the free kick and laid it in the back of the net to increase the Sockers lead to 3-1 at halftime. 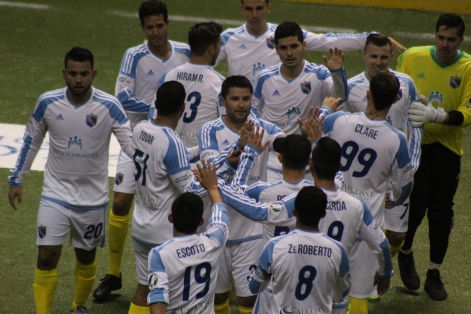 The Sockers came out of halftime attacking but it would be Tacoma that scored the first goal of the 2nd half. Philip Lund scored an unassisted goal with 12:02 left in the 3rd to narrow the score to 3-2 with San Diego still on top. Half-way through the quarter, the Sockers were on the power play after Chiles had his legs taken out by a player that he had a confrontation with just a few seconds prior to the foul. Chiles made the Tacoma Stars pay for the penalty as he completed the hat trick with his third goal of the game, assist going to Matt Clare. Sockers led 4-2 7:26 left in the 3rd. Sockers came close to increasing their lead but the 3rd quarter ended with San Diego on top 4-2.

San Diego started off the 4th quarter scoring as Erick Tovar scored off an assist from Max Touloute for a 5-2 Sockers lead with 10:25 left in the 4th. Tacoma attacked hard and had a lot of goal scoring chances for most of the 4th quarter but Boris Pardo was having none of it and made a lot of great saves to keep the Sockers lead at 3 points. That is until Kraig Chiles scored off a Luan Oliveira assist for his 4th goal of the game and 9th of the season to increase the Sockers lead to 6-2 with 5:05 left in the 4th. Tacoma wasted no time striking back as former Sockers player Evan McNeley found the back of the net to decrease the Sockers lead to 6-3. Only 12 seconds layer the Sockers were scoring again with Luan Oliveira finding the very top of the net off a Ze Roberto assist to put the Sockers lead back at 4, 7-3 with 3:43 left in the 4th. Tacoma gained a power play off a Sockers blue card late in the fourth, but that didn’t prevent San Diego from increasing their lead as Felipe Gonzalez scored on a short-handed goal off a Cesar Cerda assist for an 8-3 score. With the Sockers still on the power play, two Tacoma players both received blue cards, making it a 4 vs. 3 advantage for the Sockers. San Diego passed the ball around to run out the rest of the clock for an 8-3 Victory.

The San Diego Sockers improved to 3-0 with an 8-3 home victory in front of 3,196 fans. The San Diego Sports Domination Players of the game is Kraig Chiles who had 4 goals in the game. Chiles also scored his 9th goal and 11th point in the season. The Sockers next game is at home Sunday November 19th, vs. rival Ontario Fury.