The San Diego Sockers took their 8-0 record into Sunday’s match against the Turlock Express with all the intentions of walking out 9-0. Sockers were fresh off an 8-2 victory at Turlock just two days prior. San Diego won the both meetings against Turlock and with a win Sunday would clinch the regular season series. 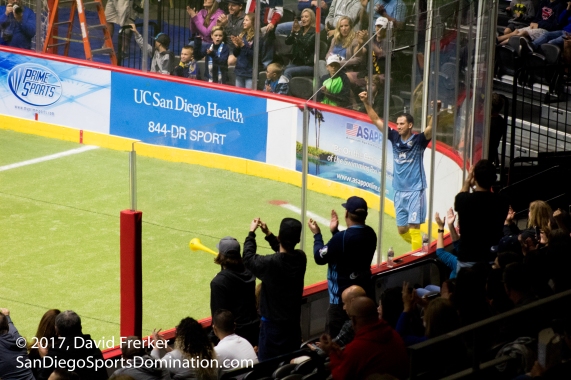 San Diego scored first in the 2nd quarter as Hiram Ruiz scored off a Kraig Chiles assist, giving both players their 2nd point of the game, Sockers led 4-1 11:28 left in the 2nd. Sockers scored 63 seconds later as Luan Oliveira scored off a Raymundo Reza assist to extend San Diego’s lead to 5-1. Sockers failed to score the rest in the 2nd quarter and led 5-1 at halftime. Both teams combined for only 13 shots on goal (San Diego 8, Turlock 5).

The Sockers wasted no time starting off the 3rd quarter scoring as Kraig Chiles found Matt Clare 18 seconds into the quarter. Sockers led 6-1 with 14:42. The entire match was very physical with a ton of non calls so much so that Sockers Captain Kraig Chiles voiced his opinion to the officiating crew. Our camera man David Frerker was shooting close to the field and heard the conversation. “Chiles kept repeating to the officials that someone is going to get hurt,” Frerker said. Half way through 3rd quarter, a blue card was issued to Turlock for boarding, giving San Diego a power play opportunity. The Sockers capitalized as John Sosa found Matt Clare for his 2nd goal of the match to put San Diego up 7-1. Sockers were about to score again but a Turlock player drag down a San Diego player drawing a blue card and a shootout opportunity for San Diego. Kraig Chiles capitalized on the shootout opportunity for his 2nd goal and 4th point of the game. Sockers led 8-1 at the end of the 3rd quarter. 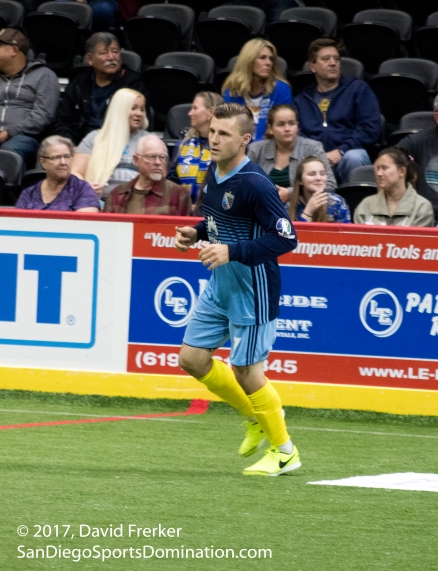 To start the 4th quarter, the Sockers added on to their already large lead as Erick Tovar found Brian Farber for a beautiful back heel kick that found the back of the net for a 9-1 lead. San Diego found itself with a double digit lead as John Sosa found Hiram Ruiz for his 2nd goal of the game and a 10-1 Sockers lead. Sockers ran out the rest of the clock for a 10-1 lead.

GOAL!!!!!! @KraigChiles scores his 2md goal and 4th point of the game on a shoot out goal@SanDiegoSockers lead 8-1 :59 seconds left. pic.twitter.com/qm4YhVt5ba

Sockers improved to 9-0 in front of a crowd of 2,652 with their 10-1 beat down of Turlock. Kraig Chiles is the San Diego Sports Domination player of the game with 4 points (2 goals, 2 assists). With the win, the Sockers clinched the regular season series against the express. The Sockers next game is at home vs Tacoma on Friday Janiary 12th, and it will be Military Appreciation Night. The fans in attendance will get a Sockers Military Camoflauge hat.