In the girls’ 5K race, Masciarelli outkicked Katelynne Hart of Glen Ellyn, Ill., in the final few meters to showcase a phenomenal finish, winning in a time of 17:00.3, surpassing Jordan Hasay’s 2005 record as the fastest first-timer at National Finals. In the boys’ 5K race, Hocker surged away from Jake Renfree of Knoxville, Tenn., with 300-meters remaining to claim his 15:13.7 victory.

Masciarelli, a sophomore competing in her first year of cross country, bided her time until the closing uphill and downhill stretch to edge Hart, who had controlled the race from shortly after the half-mile mark until the final few strides. Hart opened up her biggest lead going up the course’s hill the first time, cruising past the mile mark in 5:13. This initial surge broke up the lead pack with only Masciarelli and Taylor Ewert of Beavercreek, Ohio, staying in striking distance of Hart halfway through the race. Hart continued to lead at the two-mile mark cruising through a split of 10:50 with Masciarelli still lurking five seconds behind and freshman Abby VanderKooi of Fremont, Mich., moving into contention.

The last mile turned into a classic two-girl duel, one that included multiple lead changes in the final 200 meters until Masciarelli ultimately prevailed at the tape. Hart’s runner-up finish (17:01.0) replicated her last year’s placing at FLCCC National Finals. Freshman VanderKooi came in third (17:14.0), Ewert in fourth (17:20.1) and Emily Covert of Minneapolis in fifth (17:29.6). 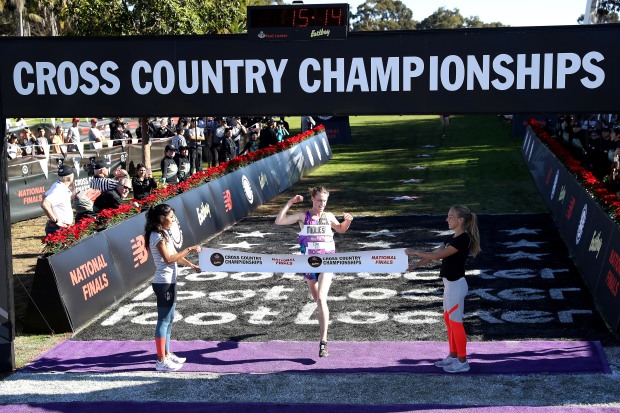 In a boys’ race, which featured juniors and seniors only, Hocker controlled the early pace then exchanged front-running duties with Josh Methner of Mount Prospect, Ill., until well past the two-mile mark. It was anyone’s race at the two-mile mark, with a pack of 13 runners, until Hocker and a determined Renfree turned the event into a two-runner battle.