It was a close match until the craziest fourth quarter the Sockers have had a quite a while. San Diego (8-1) closed out the game with a four goal period, to turn the match into the blowout that some were expecting.

El Paso (2-5) broke the scoring open with a power play goal with just over three minutes to go in the opening quarter. Alex Caceres scored a give me goal after a turnover by Boris Pardo near the red line. Caceres just chipped it over and into the back of the net.

Just after the ten-minute mark of the second quarter, Jorge Rios shot from a very sharp angle. The referees in the crowd certainly didn’t think it crossed into the net, but it did.

Two minutes later, the Sockers finally cracked the scoreboard. “The Captain” Kraig Chiles redirected a pass from Guerrero Pino from the left point to slice the Coyote lead in half. 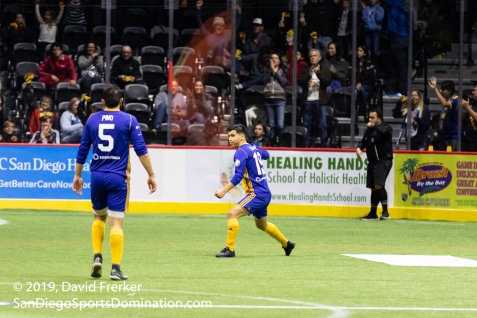 Brandon Escoto celebrating his lone goal of the night.

With one-minute left in the second quarter, Chiles triggered a free kick (like he always does) at the top of the crease. He shot it but the rebound was laying perfect for Brian Farber to just tap it past the outstretched Coyote keeper.

In a very uneventful third quarter, Leo De Oliveira scored his third goal of the season from a beautiful pass from Brandon Escoto.

Then the fourth quarter came.

First Chiles scored his second goal of the night off another Escoto pass. Ten seconds later, El Paso kept pace with a goal of their own. A minute later, Farber scored what would end up being the game-winner from a De Oliveria assist. Just 70 seconds later, the Coyotes netted their final goal. With 2:38 left in the game, Escoto scored his only goal of the match on a blazing shot past the El Paso keeper. Luis “Pee Wee” Ortega scored his fourth goal of the season on an empty netter. Farber stole the ball fed it to Ortega and he put it in the back of the net to seal the game.

Boris Pardo making an amazing save.

After traveling to Tacoma on Friday, the Sockers will be back at PASD on Sunday, Jan. 20 to face Turlock at 5:05.

The San Diego Sports Domination player of the match is Brian Farber. The veteran scored the game winning goal in the crazy fourth quarter.