The San Diego Legion played their home/season opener of the second season on Saturday and their opponent was a team in their first season, Rugby United New York. The Legion fell in the semi-finals last season and are now starting a whole new season with the goal of advancing farther.

The Legion got off to a slow start and fell behind 0-15 in the first half. The game got a little chippy with some pushing and shoving after plays were over but nothing to dramatic. San Diego finally got on the board when Nick Boyer scored and the Legion went into halftime with momentum down 7-15.

San Diego had a much better start in the second half scoring 3 penalty kicks to take a 16-15 lead in the 62nd minute. While down 13-15 the Legion got a huge goal line stop forcing New York into a turnover on a penalty. New York took the lead back 18-16 on their own penalty kick in the 64th minute. San Diego responded by retaking the lead on a try by Joe Pieterson. San Diego led 23-18 in the 72nd minute. With 8 minutes left, New York started to move their way down the field. With New York close to scoring, Save Totovasau knocked a New York down resulting in a knock-on. After the referees met and discussed the play, the referee determined the penalty was an intentional knock-on and award New York a try and the lead, 25-23 with 3 minutes left.

Totovasau  was also given a yellow card on the play and had to sit out the remaining minutes of the game. San Diego was unable to score on their final chance with the ball as they lost the ball in contact and New York kicks the ball out of bounds after time expired for a 25-23 defeat. 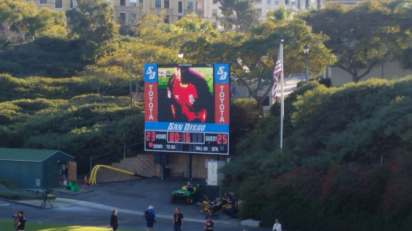 The Legion start the season off 0-1 and will face the team they ended their season to i the playoffs reigning MLR Champions, the Seattle Seawolves at home in their next game, Saturday February 2nd.