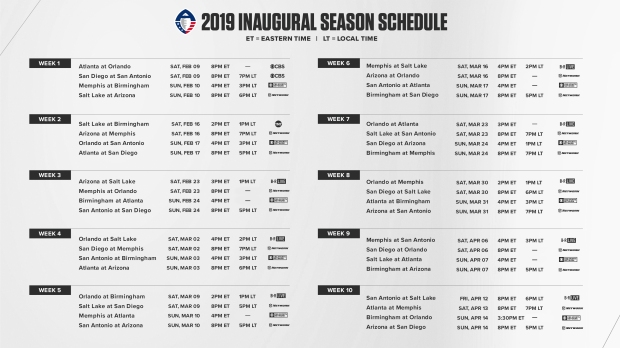 SAN FRANCISCO, Calif. – February 8, 2019 – The Alliance of American Football will take its first snap this weekend with a full schedule to launch its historic, inaugural season. The full slate of games will be available to fans across The Alliance’s broadcast partner networks, key digital distribution partners as well as for free on iOS and Android platforms via The Alliance of American Football app with the following lineup:

Deep in the heart of Texas, fans will get their first look at San Diego’s newest pro football team and the exciting return of football to San Antonio with head coach Mike Martz and The Fleet taking on Mike Riley and his Commanders on CBS in primetime at The Alamodome.

Tune in: CBS (78% of US), Alliance of American Football App, Sirius XM Radio

Head Ball Coach Steve Spurrier makes his much-anticipated return to the sidelines for The Orlando Apollos to take on top defensive-mind Kevin Coyle as he makes his head coaching debut for The Atlanta Legends at Spectrum Stadium.

Fans looking to secure tickets for the inaugural season can purchase tickets on AAF.com or by calling 1-833-AAF-2019. For a look at The Alliance’s full schedule, visit https://aaf.com/2019-season-schedule/.

About The Alliance of American Football

Led by some of the most respected football minds in the game, The Alliance of American Football is top-flight professional football fueled by an unprecedented Alliance between players, fans and the game. Founded by TV and film producer Charlie Ebersol and Hall of Famer Bill Polian, The Alliance features eight teams with 52-player rosters playing a 10-week regular season schedule beginning February 9, 2019 on CBS, followed by two playoff rounds and culminating with the Alliance Championship game at Sam Boyd Stadium in Las Vegas on April 27, 2019. Additional broadcast and distribution partners include Turner Sports — TNT and B/R Live — as well as the NFL Network. Fans can stream key Alliance matchups live via the free Alliance app while accessing integrated gaming options. With a focus on player well-being on and off the field, The Alliance provides players with a commitment to safety and state-of-the-art equipment as well as a comprehensive bonus system, post-football career planning, financial counseling and scholarship support for postsecondary education. For more information, visit https://aaf.com/.

The eight cities, stadiums and head coaches are as follows: