It was throw back night at Torerro Stadium as the San Diego Legion were going back to the 80s. After defeating the defending champion Seattle Seawolves to become 1-1, the Legion faced their next challenge in the 1-0 Houston Sabercats. This time, the game was dry but 54 degrees. The players looked like they had steam coming off of them once they started to generate body heat during the game. The crowd was rocking and it was time for Rugby.

Houston got the scoring started when Josua Vici broke off a long run for a Try. Legion were down 0-10 before getting a penalty kick to finally get on the board. Sabercats got a penalty kick of their own to make the score 3-13.

San Diego had chances to score but turned the ball over or just lost the ball in the ruck. There was a lot of pushing and shoving during dead ball periods, with some shoving being a hand to the face and even what looked to be a choke hold just to get the ball out of the opponents hands to start play up again. Despite not playing a good half and not controlling the ball well, the Legion were only down 10 at half.

San Diego did a way better job of ball control in the 2nd half and the physical hits started to pick up as well. San Diego held the ball for most of the 2nd half but struggled to get a try do to turnovers or penalties in scoring position, but you could feel that they were getting closer to finally breaking that line. Then they did with help from Mike Teo breaking off a good run and then a few passes and some good running and the Legion were in scoring range. Keni Nasoqeqe finally gave San Diego their first try of the night in the 75th minute to make the score 10-13. 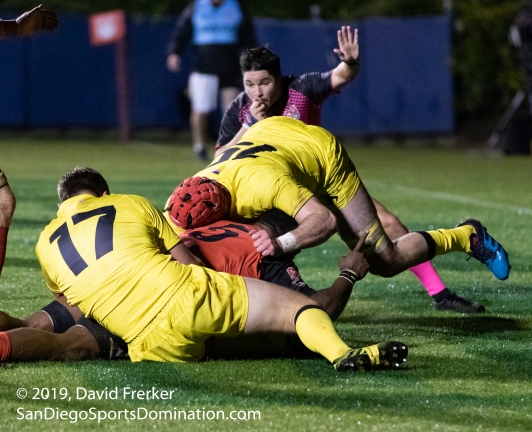 The crowd was loud the whole game and even more so as the Legion had the ball with a chance to take the lead. With time running down and the Legion with the ball, Joe Pieterson took the ball to the left sideline and broke a big run before tossing to Nate Augspurger with ran it in for the game winning try in the 79th minute.

The San Diego Legion would win the game 17-13 in dramatic fashion. The win was the Legion’s second consecutive moving them to 2-1 on the season. The score of 17-13 was also the exact same score  (17-13) that they beat Seattle in the previous week. The Legions next game is a 2pm kickoff on Sunday, February 17th at home vs the Utah Warriors. The game will also be international rugby day.