After three consecutive comeback victories at home, the magic has run out. Nick Novak kicked the game-winning field goal as time expired and the Birmingham Iron (4-2) took down San Diego Fleet (3-3) 32-29 on Sunday night.

“We played hard, just too many errors,” said Fleet head coach Mike Martz, “The only team that can beat this team, is this team, and this was a perfect example of it.”

San Diego squandered Dontez Ford’s huge receiving night, who finished with 183 yards, second-most in league history, by not sealing the deal after he left with an injury in the third quarter. 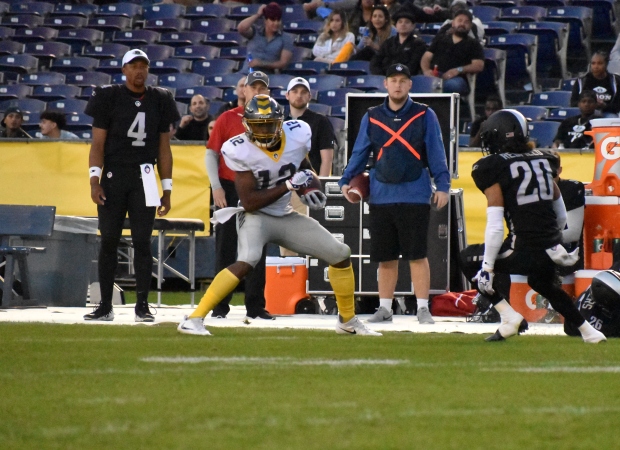 “I think that Dontez Ford, I don’t think its a serious injury. We should get him back real soon. Hopefully, we will” Martz said.

Trent Richardson opened up the scoring for the Iron when he took a short pass from Perez and broke several tackles on his way to a 13-yard touchdown.

It wouldn’t take long for the Iron to add on to their lead as two Fleet defenders collided, opening up a seam for an 83-yard catch and run touchdown by L’Damian Washington to make it 12-3.

The Fleet offense found a spark two drives later when Bercovici uncorked a deep ball to Dontez Ford for 72 yards, and Ben Johnson capped the drive with a 1-yard TD. After the Iron scored the next nine points, the Fleets offense exploded in the third quarter.

Ford recorded his second 70+ yard reception of the game, and Mike Bercovici converted a pivotal fourth down conversion en route to 14 straight points to take the lead 21-23.

After relinquishing the lead once again, the Fleet were able to tie the game with 4:32 remaining with Bercovici’s third touchdown of the game, but in the end, it wasn’t enough.

“Don’t take nothing from Birmingham, they’re a great team, they just came out with it,” Moore said, “Next time we just gotta figure out how to keep that lead, stomp them out and finish the game.”

The Fleet now ship out on a three-game road trip and face off with the Arizona Hotshots (3-3) on Sunday, March 24th at 1 p.m. PT airing on CBS Sports Network.

My name is Daniel Wade and I am a writer for San Diego Sports Domination, covering the Chargers and co-host of The Chargers Domination Podcast. I hope to use my years of playing football, and years of being a loyal fan to the San Diego Chargers to bring a unique perspective and give in-depth analysis on San Diego's favorite sports team. I am also currently attending school for Journalism and would like to use this platform to help jumpstart my career of covering sports.